NAIROBI – More than 3,000 people a day are fleeing their homes in search of food and water due to Somalia’s worst drought in 20 years, the Norwegian Refugee Council (NRC) said, warning of impending famine with children already dying of malnutrition.

The devastating drought has decimated harvests and livestock in the war-torn country, posing the threat of renewed famine six years after a similar crisis in which 260,000 people died.

“These are clear hallmarks of a catastrophe in the making,” NRC’s Somalia country director Victor Moses said in a statement on Wednesday. “Now is our last chance to avert a famine.”

More than 6 million Somalis – half of the population – need emergency aid, including close to 1 million acutely malnourished children.

Families have abandoned dying cattle to beg for food in urban areas, where food prices are spiralling, NRC said.

“I feared that my children would start falling and dying too,” NRC quoted one mother with 11 children as saying.

More than 400,000 people have been displaced since November, it said, with tens of thousands fleeing to southern cities like the capital Mogadishu and Baidoa.

Cholera has spread to two-thirds of Somalia’s 18 regions, according to the World Health Organisation (WHO), with thousands congregating in cities where they are forced to drink water infected with deadly bacteria.

More than 300 people have died and almost 16,000 cases have been reported since January, WHO says.

Thousands are also fleeing to neighbouring Ethiopia, where drought is also causing immense hardship, with more than 100,000 people displaced since the start of the year, according to the International Organization for Migration.

Ethiopia’s government says it is experiencing an outbreak of acute watery diarrhoea, which is closely related to cholera. 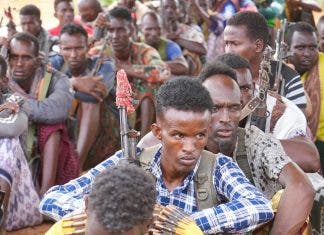