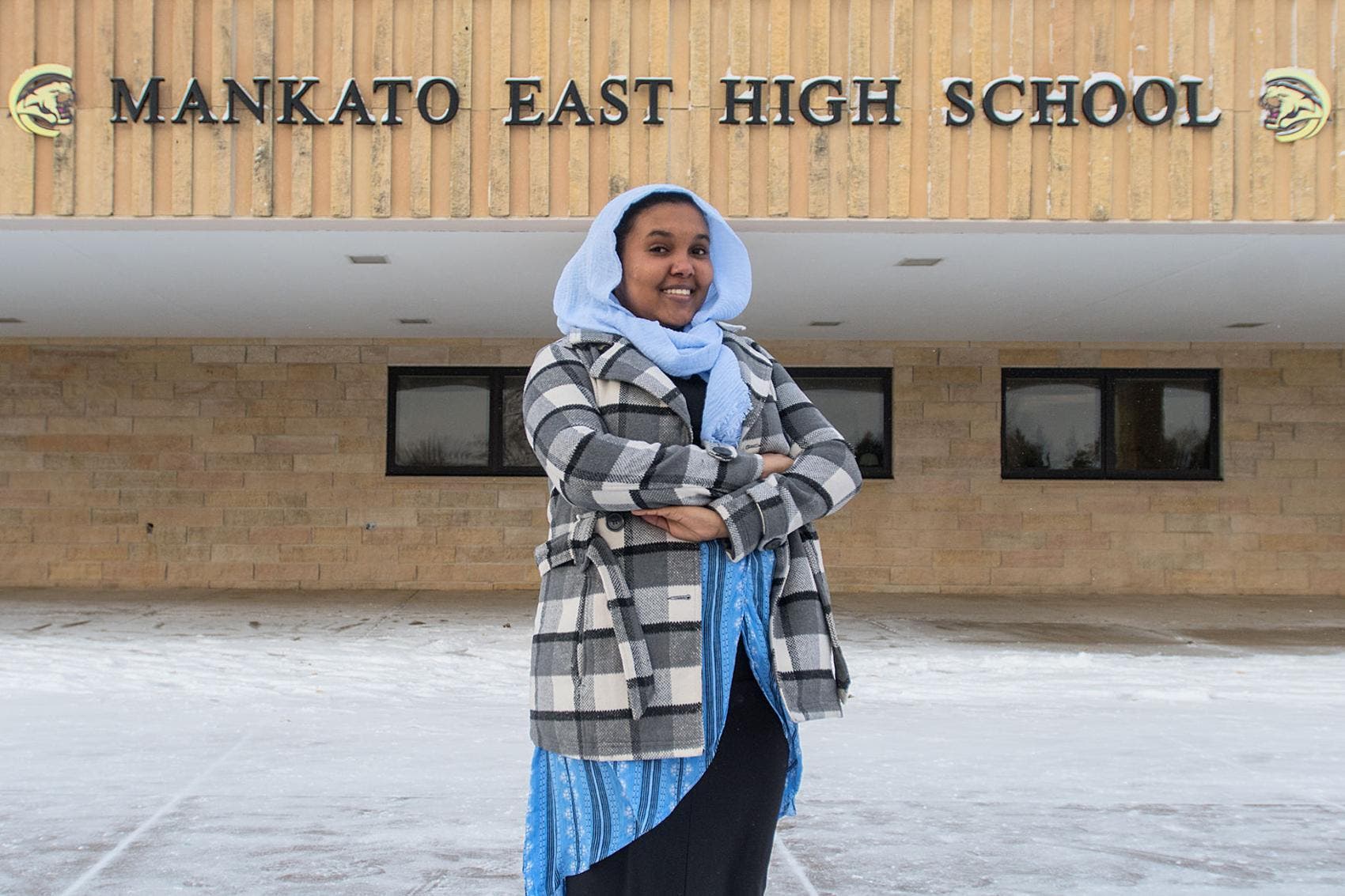 MANKATO — Nyabual and Nyamuoch Bayak were getting ready for their junior year when they say they were told they were not welcome back at East High School.

The 18-year-old twin sisters from Kenya had spent the 2016-2017 school year at West High School and after a move across town were at East High School for 2017-2018. They expected to spend a few more years at East and earn their diploma.

But as fall neared the sisters say they were told they were too far behind and needed to instead enroll in an alternative diploma program at Lincoln Community Center.

That program does not provide the same breadth and level of academic rigor and puts teens and young adults in the same classes as older adults, the Bayaks said.

Several other immigrant families have similar accounts of being pressured into an alternative program with which they were not satisfied.

After Mankato Area School Board member Abdi Sabrie and a legal aid attorney intervened, the Bayak sisters and three other young adult students were allowed to enroll or re-enroll in district high schools.

District officials say no one is forced to participate in the alternative diploma program, which is run by the district’s Adult Basic Education department. The option is recommended to older students who can’t feasibly otherwise graduate before they turn 21 years old.

For students who are behind, district leaders say the relatively new option provides an accelerated and customized opportunity to earn a diploma.

The debate has attracted the attention of the Minnesota chapter of the Council on American-Islamic Relations. Its director is calling on the district to conduct an investigation.

Minnesota law entitles its residents to a free education through age 21. Students who turn 21 during a school year can finish out the year. The law doesn’t specify what type of school adult students can attend.

In 2014 the state authorized a new adult diploma program that allows districts to provide alternative ways for adults to earn a high school diploma.

Instead of having to take a traditional GED test, participants can complete classes, projects and other forms of assessments and earn credit for work experience.

“Every student has their own pathway to success,” said Eric Hudspith, the district’s director of human resources and organizational development.

Students must be at least 19 years old to earn an adult diploma, but they can begin working on a diploma at a younger age.

Students must be able to read at at least a sixth-grade level before they can enroll in the adult diploma program. Mankato schools has a preparatory program designed for teenage and young adult prospective participants who first need to improve their language skills.

The adult diploma option hasn’t so far had many participants in Mankato or across the state. Fewer than 200 such diplomas have been issued in Minnesota since 2014. Nine of those were earned in Mankato, according to Boyer.

More students have participated but did not complete a degree. Boyer said many of them opted to instead take the traditional GED test after gaining knowledge needed to pass the test in the adult diploma program.

Deq Ali, 22, is among the students who dropped out without earning a degree or a GED. He attended the diploma program as a 17-year-old but said he stopped going because he felt he wasn’t learning enough to make it worthwhile.

Other former participants also expressed concerns about the breadth and depth of the diploma program, and about not getting to socialize with many students of a similar age.

“There is a lot of old people and they don’t teach anything. It’s too simple,” said 19-year-old Rabia Nur. After immigrating from Somalia, Nur spent two years in a Wisconsin high school before moving to Mankato this summer. She tried to enroll at East along with her younger siblings but was referred to the diploma program.

Nur said the diploma program wasn’t challenging enough and only provided instruction in English, math and job skills. She said she was was demoralized when she was placed in the same English language learner class as her grandmother and other adults who were not pursuing a diploma.

Hudspith said students are assessed when they enter the adult diploma program and the curriculum is customized for each student depending on their prior knowledge level.

Participants who are English language learners spend part of their day in classes alongside older adults with comparable English skills in the district’s Adult Basic Education program.

Nur was allowed to transfer to East High School after obtaining representation from an attorney from the Southern Minnesota Regional Legal Services. The nonprofit that provides free civil legal aid to low-income people also represented Nyabual and Nyamuoch Bayak and Mohamed Mohamed, 18, and Abdirahman Mohamed, 20.

The Mohamed brothers came to the United States from Somalia several years ago and attended high school in Rochester for two years before they moved to Mankato this fall and started at the diploma program.

The Bayak sisters, Mohamed brothers and Nur say district administrators, counselors and cultural liaisons did not present them the opportunity to attend high school through age 21 instead of the diploma program.

Asha Yusuf also claims no option was given for her 17-year-old son, Mohamed Abdulle.

Her son was going to live with his grandmother in the Mankato school district when he immigrated from Somalia last winter. He’s instead living in an overcrowded apartment with his mother and other family members in the Twin Cities because there he is allowed to attend a traditional high school.

Former adult diploma participants brought the issue to Sabrie, who is the district’s first Somali board member. He pressed district administrators to review its admission process for older immigrant students and investigate the reports that immigrant students aren’t given options.

Jaylani Hussein, the executive director of the Minnesota chapter of the Council on American-Islamic Relations, also is calling on the district to conduct an “ open and transparent” investigation.

“Whatever policy that you have that is allowing for the choice, they are not hearing it,” he said during an appearance at a recent School Board meeting. “They feel trapped in this process.”

District administrators and School Board members discussed the issue in a workshop meeting earlier this month.

Administrators said they have investigated the claims and have determined that the adult diploma program was presented as a recommendation and not a mandate. No further investigation is planned, Hudspith said in a follow-up interview.

District administrators said they will strive to improve communication with young adult students and their families.

“Let’s learn from this and make sure people understand it is a recommendation, and they have options,” Supt. Sheri Allen said during the workshop meeting.

Administrators noted the issue involves a very small group of students. Only 11 prospective students who contacted the district’s centralized registration office have been referred to the adult diploma program.

Admitting students to the traditional high schools even though they are not projected to graduate has a slight negative impact on those school’s graduation rates. Those rates are tracked as part of federal accountability measures.

But administrators say that isn’t a consideration in recommending the alternative diploma pathway.

“We’re looking at what is best for each individual student,” Hudspith said.

Sabrie said he will continue to monitor the district’s referrals to the alternative diploma program.

“I was elected to give equal opportunity to all children, and I take that very seriously,” he said.