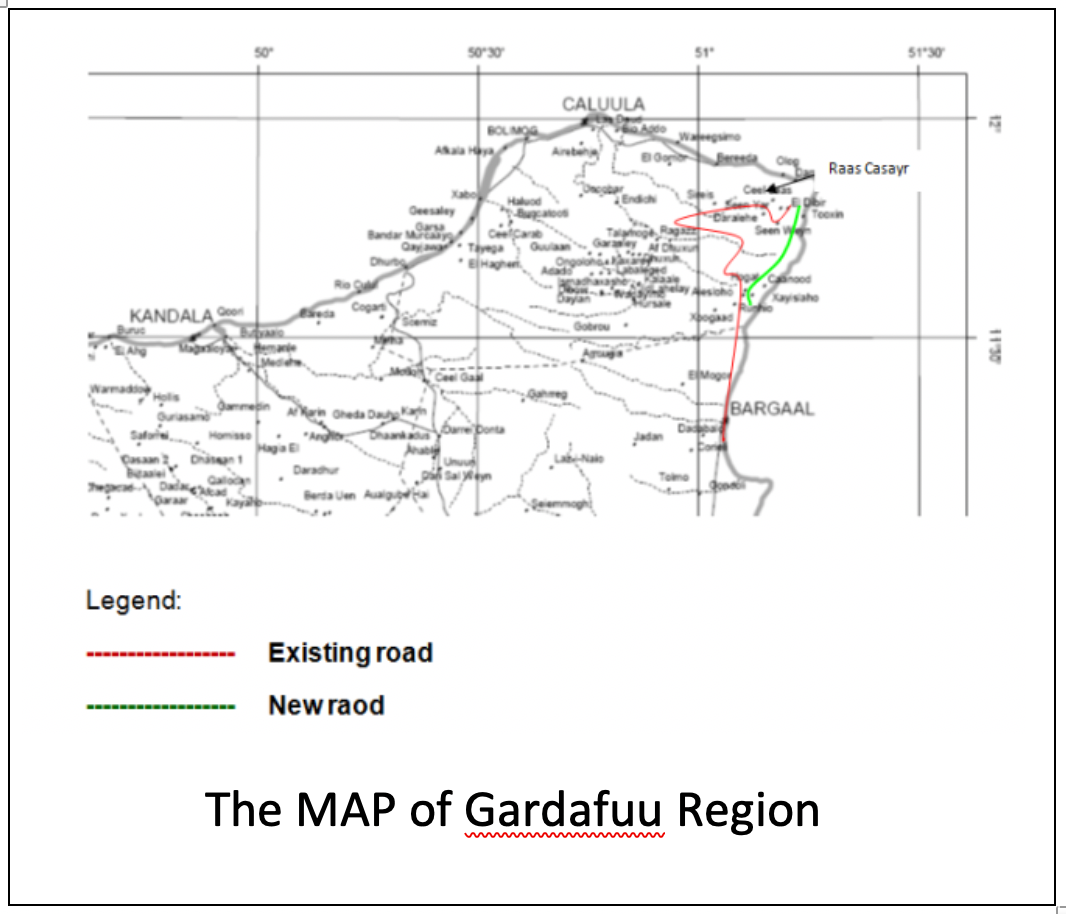 Gardafuu region is the youngest of Puntland’s current nine (9) regions. Its creation was announced in April 2013 and approved by the parliament three months later. The region was carved out of Bari region following protracted protests that reached to the level of demanding secession from Puntland as the region had been neglected in every aspect for years. Its capital of Alula is located 50 kilometres west of Cape Guardafui.

At a press conference on 3 June 2020, a group of elders, elite, and politicians from the region aired their grievances against the mistreatment of Gardafuu region and its people by Puntland state. The group had earlier on 22 April 2020 demanded from Puntland a redress to their grievances but their demands fell into deaf ears. They have revealed that they now have their own armed forces to maintain public order and safety for the people in Gardafuu. Such grievances and protests, if not redressed soon can be the second wave of a social uprising to demand secession from Puntland.

So what are their grievances?

Since the establishment of Puntland in 1998, Gardafuu region has been physically isolated and continued to be on the margin of Puntland’s sub-conscious. It suffered from so much lack of care and apathy that it seems almost impossible to catch up with the other regions in Puntland. The few persons representing the region in the authorities are not often given the platform to present the needs of the region and therefore are not attended to. The political representation of the region is also limited compared to that of other regions.

The authorities in Puntland have repeatedly halted joint assessment missions that were to be carried out by the International Organizations in response to the natural disasters that hit the region including the cyclones for reasons referred to by Puntland authorities as “insecurity” despite the region being the safest in Puntland with no crimes and terrorism ever reported since its establishment.

The cyclones hit Alula and surrounding villages wiping houses and displacing over 2000 families in November 2019. Unfortunately, Puntland authorities never responded to these natural disasters in a large scale nor did the International Organizations. The main feeder roads were blocked and damaged as a result of the heavy rains beyond minor repairs, the only real infrastructure in the region. The only airport in the region also requires maintenance to allow planes to land. The communication sector is still in the primitive state as there is no coverage in major parts of the region.

Puntland state assigned a committee to assess the damage caused by the heavy rains on the main road of Lafogoray for possible major maintenance. Unfortunately, and as of today, no maintenance has been performed – instead, the funds voluntarily collected from the people of Puntland for this purpose were corrupted.

The region is suffering from poor healthcare and education services, lack of clean water, and electricity among others. The blocked feeder roads left the people with a lack of dietary choices and adequate nutrition, therefore, resulting in vulnerable people, particularly amid the spread of COVID19. Pregnant women die due to pregnancy complications and childbirth-related causes for lack of emergency obstetric care and therefore suffer obstructed labour. At times, they are transported to Bossaso for safe obstetric operation through boats on a voyage that takes more than 12 hours. Those pregnant women are not escorted by any professional healthcare staff and some of them, unfortunately, die during the journey. One can’t tolerate witnessing the way they are carried on-board the boats.

Such a lack of basic services prompted many residents to migrate to the other towns in other regions of Puntland. People in Gardafuu region believe Puntland follows the motto of “do harm” instead of “do no harm” to the people of this region.

The recently appointed Chief of Police admitted there is no list of police forces from Gardafuu that was handed over to him when he took charge of the police forces in Puntland last month. Surely, Puntland doesn’t consider Gardafuu as part of its territory. Instead, the President is planning to deploy Puntland Maritime Police Forces (PMPF) managed and funded by Saracen, a private company owned by UAE. It is believed that the deployment of the PMPF has something to do with mining contracts Puntland struck with Chinese companies as the region has untapped reserves of mineral resources, including salt, iron ore, tantalum, copper, and coal.

It is to be noted that Gardafuu renders revenue in the region of USD 4 million per year transferred directly to the government banks, but not even a tiny percentage of the generated revenue is re-invested in the region. It doesn’t also get its hands on the revenues generated elsewhere including the one generated through Bossaso port. Ironically, the Ministry of Finance has increased the taxation on the small fishing boats in Gardafuu that do not even have an infrastructure for docking.

The Federal Government of Somalia, too, did not bother so much about the situation of many regions in Somalia similar to Gardafuu that are suffering from inequality and lack of development.

It is clear that the protracted neglect and unequal access to the resources have triggered frustration and protests among the elite, elders, and youngsters. It has also found expression in the armed civil disobedience of the police forces whose rights were denied. Prior to these protests, the elders met the current President on several occasions and requested him to do some reforms in the region and initiate development projects with a specific focus on health and education. Unfortunately, their request was not considered. The people in Gardafuu region now seem they are making efforts to depend on their own after exhausting all the laid down non-violent procedures to demand their rights from Puntland for 22 years.

The voluntary armed police forces who called themselves as “The Somali Whale Force” requested the Federal Government of Somalia to support them since they were left unemployed by Puntland authorities.

It is expected that Puntland authorities will label those elites and police forces as terrorists, pirates or other parties funded by the Federal Government to turn them against Puntland, but the fact is so simple; those people are volunteers who took up the lost cause and aspire to bring the region out of its current mess.

Puntland is accustomed to the classic case of ‘déjà vu’ where it labels anyone or any group having a different opinion, as terrorists or individuals that are linked to the Federal Government to destabilize Puntland. But Somalis, as well as security agencies, are aware of the realities on the ground.

Nasrudin Mohamed Ahmed can be reached at ahmedfiqi2018@gmail.com