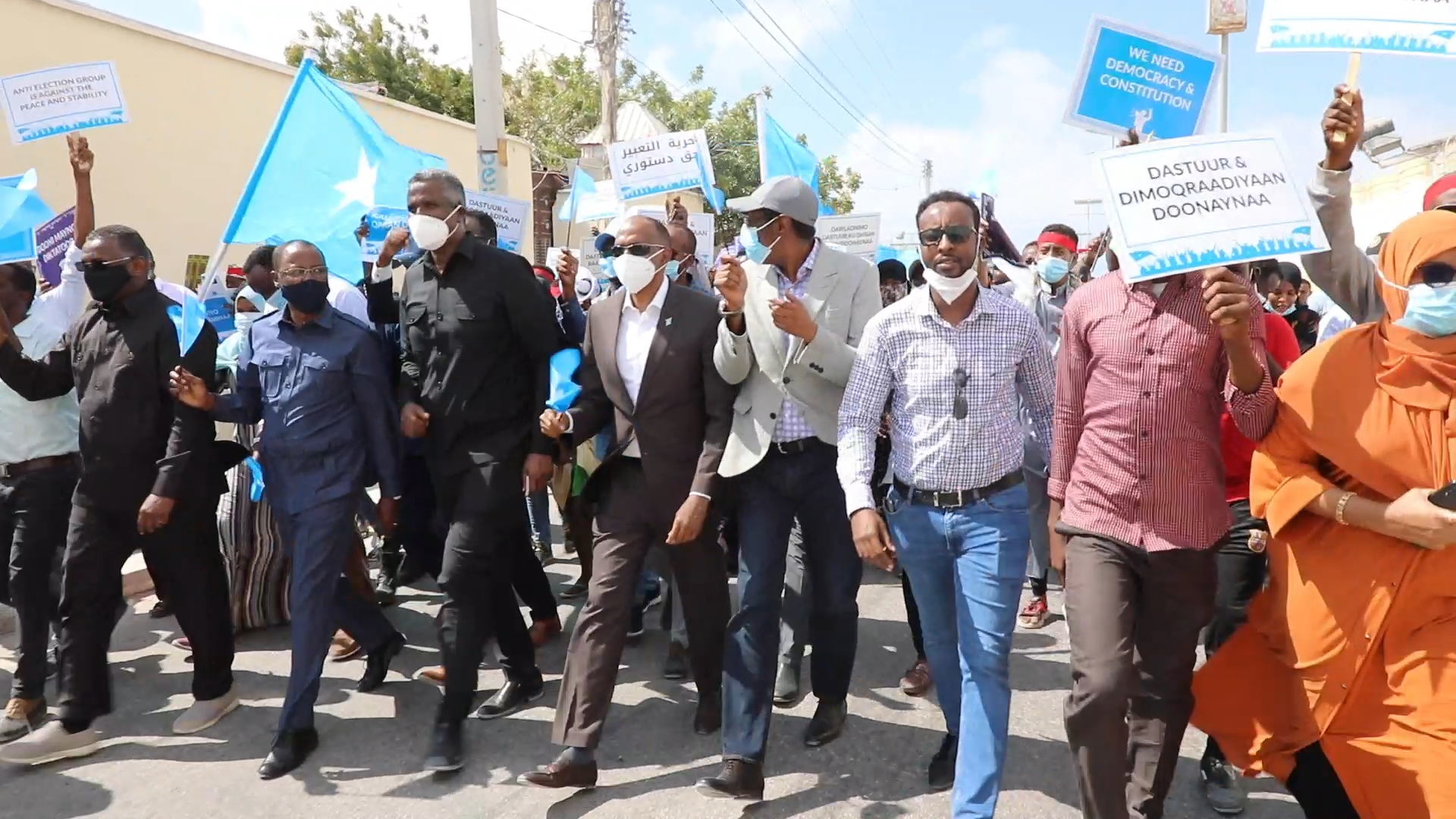 NAIROBI — Gun and mortar fire could be heard in central Mogadishu on Friday morning amid a lockdown imposed by the Somali government — a measure ostensibly intended to enforce social distancing but timed to coincide with mass protests called by opposition parties.

Somalia has been in a constitutional crisis for nearly two weeks after an agreed-upon election date elapsed on Feb. 8 without voting, leaving President Mohamed Abdullahi Mohamed, widely known as “Farmajo,” without a mandate, his opponents said.

Negotiations on a new date have failed, and Somalia’s fragile and often violent politics have exploded into acrimony. In Friday’s early morning hours, a hotel where two major opposition candidates were staying came under heavy gunfire in what one — Farmajo’s former deputy, Hassan Ali Khaire — called a crude assassination attempt.

Later on Friday, a street protest led by Khaire came under fire, and videos shared by journalists on social media showed him and supporters ducking for cover. Local authorities announced the closure of Mogadishu’s airport. Farmajo’s office did not respond immediately to a request for comment.

“It is essential to make sure that this country does not go back to where it came from,” Khaire told reporters Friday morning, referencing the instability that has prevailed for much of Somalia’s ongoing, 30-year civil war.

Over the past decade, since wresting greater control over the country’s cities from the al-Qaeda-affiliated militant group al-Shabab, a succession of Somali leaders and their foreign partners have sought to build institutions of governance, including representative elections.

That process seemed as precarious as ever on Friday, with what was essentially a political stalemate devolving into gunfire in Mogadishu’s streets.

“It’s a moment of great uncertainty. There’s still no consensus on how to move forward and the opposition is getting frustrated. This has resulted in the clashes in Mogadishu this morning, as they moved ahead to organize protests,” said Omar Mahmood, senior analyst for Somalia at the International Crisis Group.

The protests had been called by another opposition candidate, Abdirahman Abdishakur, who has repeatedly accused Farmajo of seeking to stay in power indefinitely through the manipulation of the election by collusion with a close and powerful ally, Fahad Yasin, who directs the national intelligence agency. With the election’s date now undetermined, Abdishakur has been calling for Farmajo to resign.

“They are occupying Somalia without any political mandate,” he said in a phone interview. “He should not believe that he can get away with it. He cannot create such a dangerous precedent. This supposed leader has shown no desire to compromise and now he has lost his legitimacy. So we will mobilize the people.”

Somalia’s government has pledged to work toward a “one person, one vote” system, but at present its parliament and president are indirectly elected by committees of clan elders convened in each of the country’s federal member states. In a supposedly random process, clan members then select 100 representatives from the public to physically cast votes.

That process is easy to manipulate, analysts and opposition candidates said. Payments to clan elders and their representatives are rife, and states have been essentially gerrymandered, sometimes by force, to the benefit of certain more powerful clans, including Farmajo’s Marehan.

“It’s a veneer of an electoral process. It’s outrageous that this is what’s seen as a step toward democracy,” said Mohamed Mubarak, executive director of the Hiraal Institute, a Somali think tank.

Mubarak said negotiations over a new election date have stalled because of a disagreement over the number of members of parliament one of Somalia’s regions, Jubbaland, should have.

“Somalia is held to ransom over negotiations over a few members of parliament,” he said. “The way things look now, there will be violence, and Farmajo’s reputation will be ruined. But in the end, the one to concede will not be Farmajo. Meanwhile, al-Shabab will continue to seem a more and more viable alternative to the federal government.”

Somalia’s main partners — and funders — in Washington urged an end to the violence and an immediate conclusion to negotiations on a new election.

The outgoing Trump administration in Washington ordered the removal of around 700 U.S. security personnel from Somalia by January, to be repositioned on bases in neighboring Kenya and Djibouti, where they continue to advise and train Somali special forces.

“Quickly resolving the current electoral impasse is critical to Somalia’s future,” a statement from the U.S. Embassy in Mogadishu said, soon after the Feb. 8 election date was missed. “It is the responsibility and the duty of national and regional leaders to put aside the search for political advantage and instead act in the interests of the people of Somalia, who deserve the best from their leaders. Now is the time to resolve outstanding issues and finish the job of holding elections.”

That position is likely to be untenable, especially if violence continues to flare, said Mahmood, the analyst.

“For now, the international community is trying to avoid vacuum, but the stakes will continue to get higher and higher the longer the stalemate lasts, and the risks of being associated with Farmajo could delegitimize their standing, the further this goes on,” he said.

Abdirahman Abdishakur, the opposition leader who called Friday’s protests, said the United States, United Nations and others who had partnered with Farmajo over the past years and who now continue to call him president were standing in the way of a solution to the crisis.

“We expect the international community to exercise its leverage after having given billions of dollars to this country and this government,” he said. “Why else are you here? Why fuel impunity instead of accountability? He will understand only that he can do whatever he wants. Say out loud that his mandate is over.”

Omar Faruk in Mogadishu contributed to this report.