A political bloc led by populist Shia cleric Muqtada al-Sadr, a long-time adversary of the United States who also opposes Iranian influence in Iraq, has won the country’s parliamentary election, the electoral commission said on Saturday.

Sadr himself cannot become prime minister because he did not run in the election, though his bloc’s victory puts him in a position to have a strong say in negotiations. His Sairoon electoral list captured 54 parliamentary seats.

The Victory Alliance, headed by incumbent Prime Minister Haider al-Abadi, trailed in third place with 42 seats, behind the Al-Fatih bloc, which won 47 seats.

Al-Fatih is led by Hadi al-Amiri, who has close ties with Iran and heads an umbrella group of paramilitaries that played a key role in defeating ISIS.

The results were announced a week after Iraqis voted in a nationwide election, which produced surprising results amid a historically low turnout. 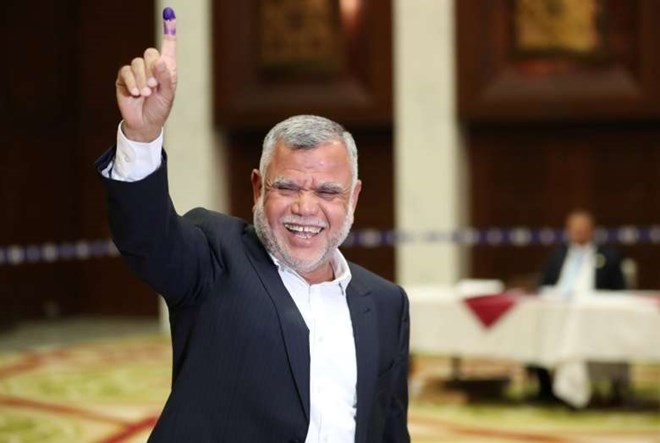 The nationalist cleric’s success could be a setback for Iran, which has steadily increased its influence in Iraq — its most important ally in the Middle East — since a U.S.-led invasion toppled Saddam Hussein in 2003.

Sadr was able to capitalize on growing resentment over Tehran-backed governments who have failed to improve basic services and build hospitals and schools in a country devastated by the war against the Islamic State in Syria and Iraq (ISIS) and by sectarian bloodshed.

It was a remarkable comeback for Sadr, who for years had been sidelined by Iranian-backed rivals and was regarded by U.S. and Iraqi officials as an unpredictable maverick.

He reached out to dispossessed Shias and marginalized Sunnis, and restored links with Sunni neighbours while keeping Iran at bay. 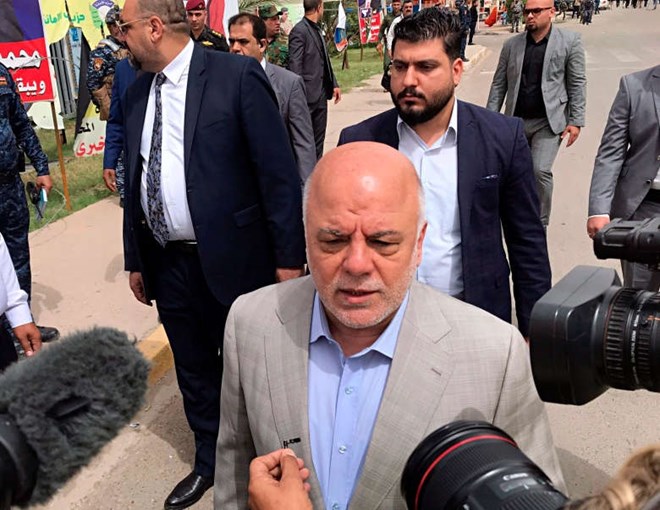 Iraq Prime Minister Haider al-Abadi speaks to reporters after casting his ballot in the country’s parliamentary elections in Baghdad on Saturday. His party came in third place. (Associated Press)

Sadr became a symbol of resistance to foreign occupation when he led two violent uprisings against U.S. troops, prompting the Pentagon to call his Mehdi army militia the biggest threat to Iraq’s security.

He derives much of his authority from his family. Sadr is the son of the revered Grand Ayatollah Mohammed Sadeq al-Sadr, who was killed for defying Saddam Hussein.

In his Baghdad stronghold of Sadr city, where posters of his father could be seen, people expressed concern that Sadr would be out-manoeuvred in what are expected to be long, tough talks on forming a government.

“New lists and candidates have won. But they are unable to form a government because the previous politicians are foxes and I believe that they aim to form big alliances in order to isolate the new blocs,” said one resident, Muied Hatim. 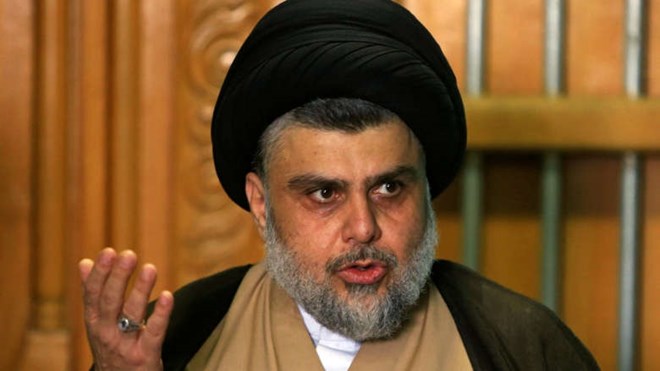 In the 2010 election, Vice-President Ayad Allawi’s group won the largest number of seats, albeit with a narrow margin, but he was prevented from becoming prime minister. He blamed Tehran, which  manoeuvred Nuri al-Maliki into power.

Winning the largest number of seats does not automatically guarantee that Sadr will be able to hand-pick a prime minister.
Parties will have to align themselves to try and form a bloc large enough for the parliamentary majority necessary to nominate a candidate. The government should be formed within 90 days of the official results.

“Your vote is an honour for us,” Sadr tweeted moments after the official results were announced in the early hours of Saturday. “We will not disappoint you.”

The election dealt a blow to Abadi, but he could still emerge as a compromise candidate palatable to all sides because he has managed the competing interests of the United States and Iran — unwitting allies in the war against ISIS — during his term in office.

Amiri is regarded as one of the most powerful figures in Iraq. He spent two decades fighting Saddam Hussein from Iran.

The victory was a surprising change of fortunes for Sadr.

His bloc’s performance represented a rebuke to a political elite that some voters blame for widespread corruption and dysfunctional governance.

It was also bolstered by a historically low turnout across the country, estimated earlier in the week at 44.5 per cent. Sadr maintains a loyal base of supporters who turned up to the polls amid widespread national apathy.

Sadr’s unlikely alliance with communists and secular Iraqis says it fiercely opposes any foreign interference in Iraq, which is strongly backed by both Tehran and Washington.
It has promised to help the poor and build schools and hospitals in Iraq, which was battered in the war to defeat ISIS and has suffered from low oil prices.

Before the election, Iran publicly stated it would not allow Sadr’s bloc to govern in Iraq, with which it shares a border.

Iranian Major General Qassem Soleimani, commander of foreign operations for Iran’s elite Revolutionary Guards and a highly influential figure in Iraq, has been holding talks with politicians in Baghdad to promote the formation of a new cabinet which would have Iran’s approval.
Last year, Sadr travelled to Iran’s regional arch-rival Saudi Arabia and met Crown Prince Mohammed bin Salman.

Shia Muslim Iran has been locked in a regional power struggle with Sunni Muslim Saudi Arabia, which has been tentatively seeking to increase its involvement in Iraq.

Earlier on Saturday, Sadr met a group of ambassadors from neighbouring countries, including Saudi Arabia.