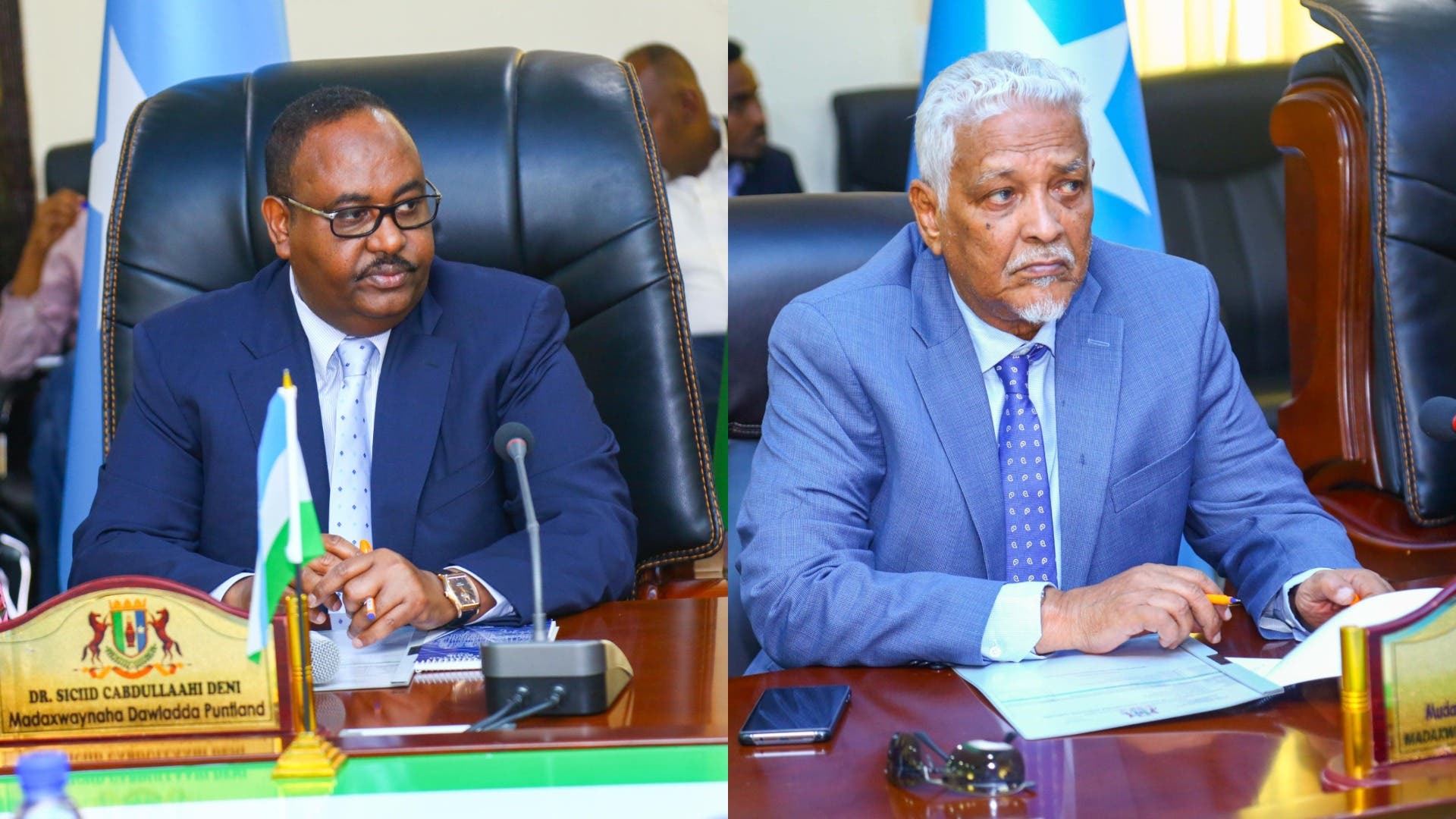 After 22 years of its establishment in 01 August 1998 (21 years, 9 months and 13 days, to be exact), a constitutional crisis is looming over the horizon in Puntland state of Somalia manifested in the feud between the President and his Vice President. The constitution was last reviewed and adopted on 18 April 2012. Prior to that, Puntland had transitional constitutions.

The cause of the argument

Both the President and the Vice President were elected on 08 January 2019 but never clicked well and could have worked on improving their working relationship before their feud reached its climax on 14 May 2020 when the President replaced the commander and the deputy commander of the presidential security forces. The Vice President strongly opposed this act alluding to his personal safety and security matters that shouldn’t be tampered with unless properly consulted. Their offices are located in the same presidential palace in Garowe.

Since then, efforts to reconcile the two men at the top in Puntland have been on-going. The two were reconciled on different occasions after coming to blows several times on appointments and dismissals. On 22 May 2020, while some influential politicians and officials including the Parliament Speaker and two former Presidents were in talks with the Vice President at his residence to ease the tension, the President unexpectedly issued a decree appointing 8 ministers including 6 deputy ministers replacing the current incumbents. The replaced incumbents were believed to be close to the Vice President.

Section 5 of article 80 of the constitution states “The President has the power to appoint or dismiss, in consultation with the Vice President, the Members of the Cabinet, heads of autonomous institutions as well as all others functionaries that this Constitution or the Laws call on him to do so”.

Section 2 of article 81 of the constitution states” The Vice President shall advise the President on the appointment and dismissal of Ministers, Vice Ministers and other senior functionaries of the State”.

The Vice President repeated the same statements during an interview with BBC on 24 May 2020 rebuffing any consultations that were said were made with him on the appointments and dismissals. He added that he discussed the issue with the President on a personal level and had one-on-one meetings with him several times to amicably resolve the differences, but seemed an energy placed behind a vain hope. He said the situation is now escalated to the extent that they don’t even exchange greetings.

In fact, the President doesn’t allow his Vice President to come close enough to participate directly or indirectly in decision making processes. The Vice President said he is not considered insider.

The Vice President told his friends that he is constantly belittled by the President. Every time the VP demands his constitutional rights, he is confronted with the fact that the region he represents (Sool region) is not in the hands of Puntland and so should behave as a guest. This mental exploitation directed at the VP is among the reasons of the long unresolvable disagreement with the President.

An influential group of businessmen, best known in Puntland as – AranJan – are the ones who call every shot Puntland takes. This, itself, begs constitutional enquiry.  AranJan backed the President during the election campaign and had different candidate in mind for the Vice Presidency who eventually lost the bid for the current incumbent leading to personality mismatch. That candidate happens to be among the newly appointed deputy ministers that created the dispute.

In addition to the constitutional crisis resulting from its ambiguity, usually, the President – being the person at the top – should demonstrate collaboration skills. Building collaboration simply means building trust and transparency in the state which makes it easier for the leader to guide the people towards the common goals. Arguments would have been avoided. Unfortunately, it is a competency leaders seem to be lacking. This time round, even the tradition of power sharing, where the political positions of Sool region are determined by the Vice President, is broken.

The constitutional crisis in 2001 has led to the former President Mr. Abdullahi Yusuf to fiercely recapture Garowe from the hands of the then legally elected President, Mr. Jama Ali Jama in November 2001. Mr. Yusuf was ousted by the clan elders after his term had come to end in June 2001. Likewise, Gen. Mohamoud Muse Adde had collided with his Vice President Mr. Hassan Dahir Afqurac over appointing minsters, a quarrel that ended up in giving away Sool region to Somalialnd. Each of the succeeding Presidents (Gas and Farole) had the same arguments with their Vice Presidents leading to constitutional crisis.

That parliament member was almost striped of his parliament immunity. Had it not been his relatives and friends in the parliament who mediated between him and the President calling off the Prosecutor General’s legal case against him, he would have been put behind the bars.

Few days later, the Parliament Speaker was attacked in his office where some of his security forces were killed, before he was ousted in a vote of no confidence the next day. The Speaker had different opinions and was about to question external deals that were sealed by the current and previous administrations including the deal with the DP World. Unfortunately, anyone, including the VP that questions the financial gains attained through such deals is expendable in Puntland.

If the current efforts of reconciling the President and his Vice fail, which is likely considering the inflexibility already demonstrated by the President, they would be left with only one option; the Parliament. Both men cannot submit a motion of no confidence against each other. Meantime, the parliament has a window to resolve the issue, or remove both men or one of them from office in a vote of no confidence and pave the way to fresh elections.

In general, Puntland is facing crisis. The security situation is deteriorating. In the past one year and four months, the head of DP World was assassinated in Bossaso. Two Governors (i.e. the Governors of Nugal and Mudug) were murdered. Tens of Government Officials and civilians were killed in the major towns of Puntland.

Puntland administration doesn’t have a clear security plan and strategy to counter the growing insecurity. The President’s continuous frictions with the senior officials in his government, his irrational backing for Jubaland’s Madobe as well as his negative thoughts and comments on the Federal Government are often ridiculed by his sceptics as unwise.

Puntland is now in the grip of a massive political crisis and many people believe the current administration would lead Puntland in to a disastrous devastation that would not be remedied for years to come. There is no inclusiveness in the administration as the majority of the people in Puntland feel marginalized and are not allowed to participate in the political processes in the region instigating gross grievances across Puntland.

Puntland State maintains frosty relationship with the Federal Government of Somalia for reasons not known to many. The on-going insecurity and political dilemma may have pushed Puntland President to throw accusations here and there in an attempt to cover up the shortcomings of his administration that is characterized with bad governance, impatience, corruption and inflexibility with no clear vision to reverse the situation.

As the traditional clan elders are yet to get involved in the current situation, Puntland’s President is currently facing calls from elites in Puntland to resign in a last attempt to save Puntland from imminent ruins. But no one knows whether he would listen to these voices or continue to wreak havoc in Puntland.

I also strongly recommend the constitution to be reviewed for more clarity and the Constitutional Court to be established as soon as feasible.

Nasrudin Mohamed Ahmed can be reached at ahmedfiqi2018@gmail.com