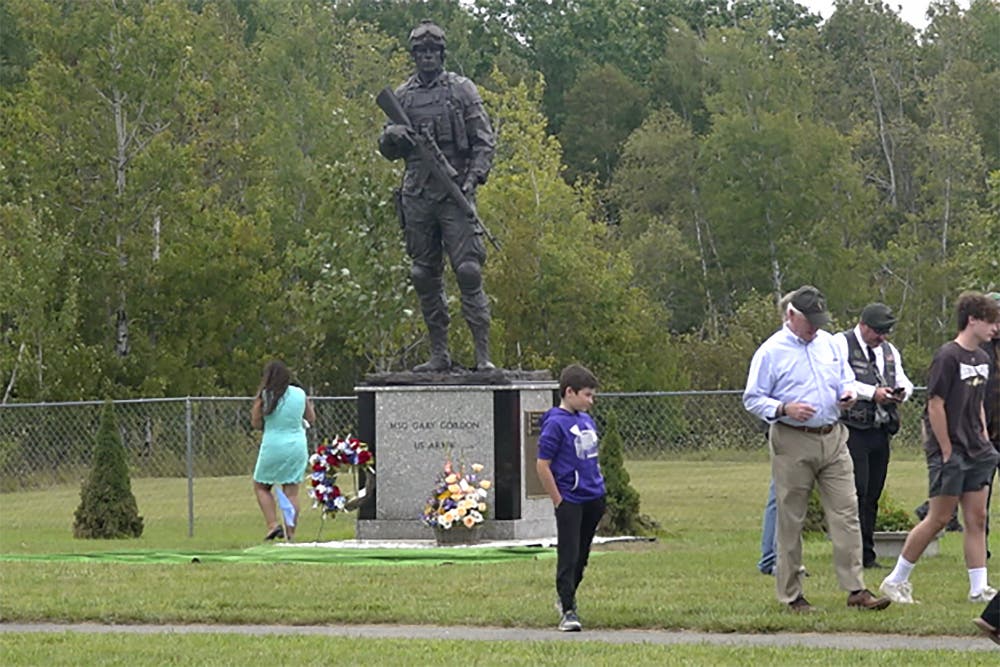 LINCOLN — A U.S. Army special forces soldier who died while performing a rescue of a downed helicopter crew in Somalia was immortalized Monday with a memorial in his hometown.

Master Sgt. Gary Gordon, a native of Lincoln, Maine, pleaded to be allowed to protect the helicopter crew members against a mob in Mogadishu in 1993. He and another soldier were killed.

The pilot who survived was among those in attendance for the unveiling of the memorial for the Medal of Honor recipient.

Republican Sen. Susan Collins, who attended Monday’s event, said the “integrity, devotion to duty, and courage that Master Sergeant Gordon demonstrated in Somalia nearly three decades ago were forged right here in Lincoln, in his family and in this community.”

The memorial consists of a statue of Gordon holding a rifle with a scope atop a base engraved with his name.

Gordon was a Delta Force sniper. He was portrayed by Nikolaj Coster-Waldau in the 2001 movie “Black Hawk Down.”

The day began with U.S. forces doing battle with a Somali warlord’s soldiers. During the battle, two U.S. helicopters were shot down, and one of the crashed choppers was isolated from U.S. forces.

Aloft in another helicopter, Gordon asked twice, and was turned down both times, to be allowed to help the unprotected crew. He and Sgt. 1st Class Randy Shughart were granted permission after a third request.

“The pilot of the aircraft that inserted him said no one in their right mind would have asked to do that,” said retired Col. Ron Russell, a veteran of the battle who spoke at the memorial’s dedication.

During the rescue, Gordon and Shughart pulled the injured pilot, Chief Warrant Officer 3 Michael Durant, from the helicopter. Durant, of Berlin, New Hampshire, was in attendance at Monday’s ceremony.

The soldiers understood the Ranger and Special Forces creed that “I will never fail my comrades,” Russell said.

“There were comrades in arms down below them who needed their help, and they were determined to provide it,” Russell said. Gordon and Shughart were both killed by enemy fire.