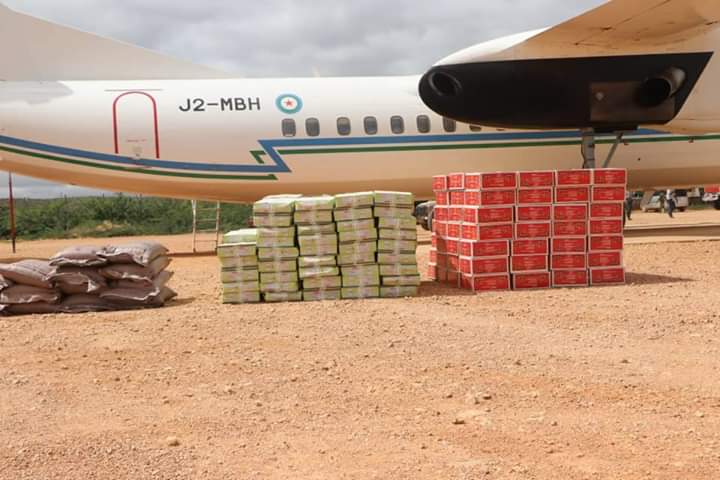 A cargo plane carrying humanitarian aid dispatched by the government of Djibouti has arrived in the central town of Beledweyne, the regional capital of Hiiraan on Monday

The humanitarian supplies were meant to assist hundreds of people displaced by floods in the region.

Djiboutian troops serving under AMISOM handed over the supplies to the leader of Hirshabelle state, Mohamed Abdi Ware for distribution.

Mohamed Barqad, a military commander of the Djiboutian troops along with the regional leader, members of the regional parliament and cabinet discussed ways to deliver the supplies to the families badly affected by the floods.

President, Mohamed Abdi Ware expressed gratitude to the government of Djibouti for the good gesture they made during these difficult times.

“I want to express our deep gratitude to the president of Djibouti, Ismael Omar Gelle, the people of Djibouti and its troops serving under the AMISOM peacekeeping mission for providing a continuous humanitarian support.”

Waare added that his administration via the Federal Republic of Somalia also received USD 600,000 earlier this year to mitigate the effects of flash floods in the central town of Beledweyne and its neighboring towns.

Beledweyne is a town in central Somalia with high-rise buildings and a vibrant commercial activity. Although it is frequently affected by seasonal rains, this year was different. The Shabelle River was so swollen with water from the highlands of neighboring Ethiopia that, in late October, its banks burst and almost completely flooded the town leaving thousands of people homeless.