A group of East African workers at Amazon’s warehouse in Eagan, Minn., demanded safer work conditions from the online retail behemoth Monday at a news conference outside the facility.

The employees made claims of exhaustion, dehydration and injuries they said they suffered while doing work as individuals that is meant to be done in teams at the facility, without air conditioning.

Further, they said working conditions were unconducive for the largely Muslim workforce, which is celebrating Ramadan. Ramadan is a holy month during which Muslims observe strict fasting from sunrise to sunset.

“Recently, I couldn’t work because I needed water,” Nimo Hirad, said through an interpreter. “I got so thirsty, I couldn’t even swallow my saliva. I ended up breaking my fast and drinking water two days in a row.”

An Amazon spokesperson disputed the group’s claims in an email seeking comment:

“We offer a positive and accommodating workplace for employees at this delivery station, including great pay of more than $15 per hour and benefits,” the spokesperson, Ernesto Apreza, said. “The site is equipped with air conditioning in the break areas and fans throughout the building.”

“We have a temporary prayer room at this location and are in the process of building a permanent one,” he said in the statement.

Worker said she complained to company

The news conference was called by Minneapolis-based Awood Center, which defends the rights of East African workers. The group has received a couple dozen complaints from workers at the Amazon facility, five of which reported injuries, in the past two months.

It was unclear if the employees also filed claims with Amazon or with the state’s Occupational Safety and Health Administration. 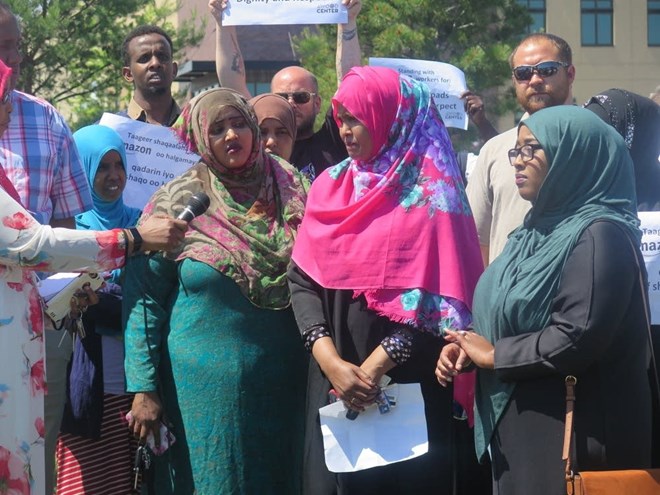 Amazon workers Nimo Hirad and Decqa Mohamed were among those at a press conference of East African workers who demanded safer working conditions at Amazon warehouse in Eagan on June 4, 2018. Emma Sapong | MPR News

“There are a lot of other workers complaining about the same issues,” said Nimo Omar, an organizer with Awood, which prompted the involvement of the center.

Omar said order pickers, who load same-day delivery packages onto vans, used to work as a team of two until a few months ago. One person is now doing the work but the workload hasn’t changed, Omar alleged. She said injuries reported to Awood have ranged from workers dropping packages on their feet to kidney pain.

Hirad, who has been a picker for about two years at the facility, said workers told management about the workload concerns a couple of months ahead of Ramadan because they knew the problems would be compounded by the sun-up to sun-down fasting.

“When we complained, the managers said if you’re not able to do the job, quit,” Hirad said.

Decqa Mohamed, also a picker, said she and other workers want considerations and more sensitivity for their religion and culture.

“We want Amazon to respect us and listen to our concerns and actually do something about those concerns,” she said, through an interpreter.

Hirad and Mohamed said the staff of pickers are largely East African and the facility doesn’t have any East Africans in management positions.

However, Amazon does have a current job posting for a Somali-speaking manager to work at that location.

The group of about two dozen people chanted and then marched their list of demands into the building, handing it to Christopher Warren, general manager of the facility.