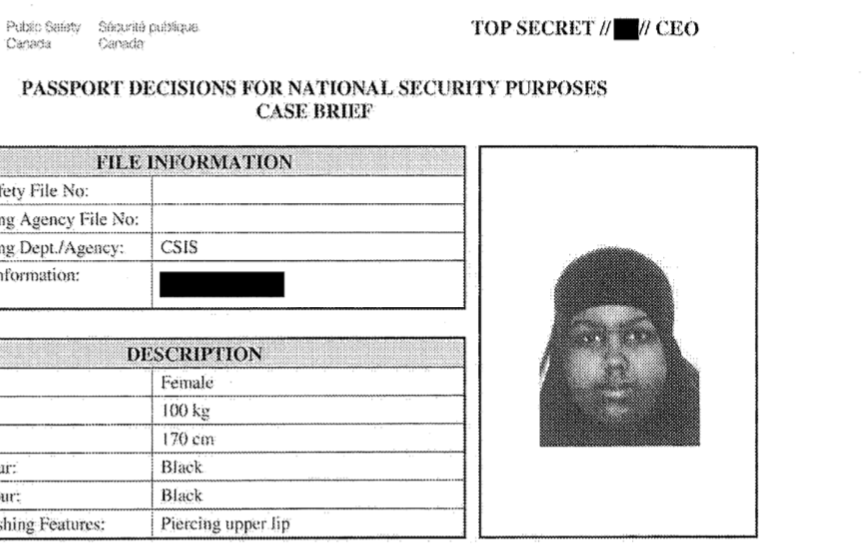 An Edmonton woman has been identified by intelligence officials as an alleged ISIS supporter and Al Shabaab member and who recruited a young Canadian to travel to Syria, Global News has learned.

Instructions on how to build a bomb were found on her computer, according to the documents, which also allege she is “committed” to ISIS and “was/is a senior member” of Al Shabaab, the Somali terrorist group.

“She has participated in the recruitment and radicalization of a Canadian, whose eventual travel overseas to Syria was encouraged and partially financed by her,” according to the documents.

Her husband, Mohamed Sakr, was a “senior figure” in Al Shabaab (AS). He was stripped of British citizenship by U.K. authorities and killed in a 2012 drone strike.

Despite the government’s allegations, Jama has not been charged with any terrorism offences. Her lawyer declined to comment, but the documents indicate she has denied any involvement in terrorism.

She continues to live in Edmonton but two sources said she had remarried and was working to turn her life around.

The explosive allegations identify Jama as a returnee — someone who has come back to Canada after having participated in terrorist activities overseas.

The government says there are currently about 60 such people in the country. Few have faced charges. Internal government files have described the challenges of prosecuting them due to the difficulty of proving what they did outside Canada.

Concerns about Jama’s alleged past are detailed in government documents filed in a highly-secretive case before the Federal Court that centres around her attempt to renew her Canadian passport.

According to the documents, after visiting the Edmonton passport office Jama was informed she was being refused a new passport “to prevent the commission of a terrorist offence.”

She was also banned from possessing a passport for four years.

The decision followed a Canadian Security Intelligence Service investigation into her alleged “threat-related activities.” Senior officials at CSIS, the RCMP and Public Safety Canada had recommended the commencement of refusal proceedings.

“Jama has a well-established association and support for AS, an organization which has made threats against targets in the United States of America, the United Kingdom, France, Canada (including the West Edmonton Mall in Alberta),” according to the Top Secret report.

Born in the Somali capital Mogadishu, Jama is a 31-year-old Canadian citizen who left Toronto in May 2010 and made her way to Mogadishu, according to a summary of the classified information.

She married Sakr and they lived in a region controlled by Al Shabaab, which has carried out scores of terrorist attacks in an attempt to impose its extremist version of Islamic law in the East African country. It has killed several Canadians.

Sakr was a childhood friend of Mohammed Enzawi, a British extremist known as Jihadi John who appeared in ISIS execution videos.

“However, Ms. Jama claimed that neither she nor her husband were involved with AS,” according to the court file, which was heavily redacted prior to being publicly released.

In July 2011, Jama travelled to Hargeysa, Somaliland, a northern region that broke away from Somalia. She planned to visit her mother but was arrested.

On her laptop, police allegedly found her will and instructions for making a plastic hydrogen bomb.

“While no evidence of attack planning has been found to date, other material of concern has been discovered. Jama’s laptop contained a folder titled ‘Explosives,’” according to a Public Safety Canada report.

Somaliland authorities deported her to Dubai, but she then flew to Djibouti, intending to return to Mogadishu. However, she was prohibited from traveling to Somalia and went to the U.K.

She was detained by British authorities and deported to Toronto.

Two months later, she tried to return to East Africa. She intended to fly to Kenya, “presumably with the intent of returning to Somalia,” but was not permitted, the report said.

Instead, she moved between Toronto, Calgary and Edmonton, and allegedly took part in the recruitment and radicalization of a Canadian, and partly financed her travel to Syria.

The young woman she allegedly helped go to Syria is now believed to be at the Al-Hawl camp, a sprawling detention facility for ISIS families in northern Syria, an expert said.

“When I was doing interviews in Alberta with family and friends of people who had traveled to Syria, there were always rumblings of a female recruiter,” said Prof. Amarnath Amarasingam.

“She aroused a lot of anger in the community because people felt as if law enforcement knew what she was doing and wasn’t arresting her,” said the Queen’s University professor.

Jama’s late husband “is important because he’s perhaps the first British-born individual who was stripped of their citizenship based on suspicion of terrorist involvement,” Amarasingam said.

He said Sakr, Jihadi John and Bilal al-Berjawi had all traveled to East Africa. Sakr and al-Berjawi were killed in drone strikes, while Jihadi John ended up in ISIS until his death.

“While details are lacking, what would be interesting to know is how these earlier generations of foreign fighters inspired and laid the groundwork for others to travel once the Syrian conflict really got going.”

As radicalized Canadians began flocking to Syria following the outbreak of civil war, the government responded by cancelling their passports and refusing to renew them.

Under the Canadian Passport Order, the Minister of Public Safety can refuse to issue a passport “when it is necessary to prevent the commission of a terrorism offence” or “for the national security of Canada or a foreign country or state.”

But the law has never been challenged in court until now.

Jama has appealed her passport refusal in the Federal Court and is challenging the government’s Prevention of Terrorist Travel Act, arguing it is unconstitutional.

In her submissions, Jama has argued that without a passport she is unable to fulfill her obligation as a Muslim to make a pilgrimage to Mecca, Saudi Arabia.

She also alleged she had “lost marriage proposals” because the men and their families were fearful when they heard she had been refused a passport.

Jama denied being an Al Shabaab member or knowingly associating with anyone who posed a national security risk, and said the “allegation that I facilitated extremist activities is shocking and completely baseless.”

While she acknowledged wanting martyrdom, she said that did not only mean to die in battle “and this is far from my intention.”

“I have never meant to engage in any sort of battle or fight,” she wrote.

“The five years I have been back in Canada should display I am a productive member of society and pose no risk,” she wrote. “I just want to be able to have the freedom to do pilgrimage to Mecca in Saudi Arabia, which is my utmost desire.”

But the government report recommending the refusal of her passport questioned the truth of her statements.

“Ms. Jama has stated that she has never, nor ever will, facilitate extremist activities. However, the information included in the CSIS case brief contradicts this claim,” it said.

“Ms. Jama has indicated her intention has never been to engage in any sort of battle or fight and explained her desire to become a martyr in that context. However, the information included in the CSIS brief contradicts this claim.”

Although women are often portrayed as little more than wives and mothers in terrorist groups, an Ottawa-based expert said they have had a well-documented role in recruitment and facilitation.

“This is a very common, if under-reported, element of women involved in terrorism,” said Jessica Davis, who said she found the allegations against Jama “completely unsurprising.”

But she said women tended to receive less scrutiny than men from counter-terrorism agencies. “So it’s not surprising to me we haven’t seen any charges in this case yet,” said Davis, president of Insight Threat Intelligence. 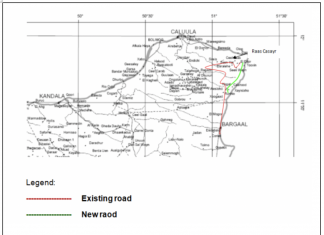 Caasimada Online - June 6, 2020
Gardafuu region is the youngest of Puntland’s current nine (9) regions. Its creation was announced in April 2013 and approved by the parliament three...