In a ceremony attended by the Prime Minister of Somalia and senior officials from the European Union and United Nations, a map showing 13 cleared districts of the capital city was handed over from EU Special Envoy to Somalia, Michele Cervone d’Urso, to Prime Minister Abdiweli. Beginning 2010, the EU together with implementing partner UNMAS, systematically cleared Mogadishu of almost 1,000 items of unexploded ordnance which, over the course of twenty years of civil war, had littered the city, endangering the lives of its inhabitants.

“Through its stabilisation efforts, the EU has contributed to a sharp decline of all the known explosive remnants of war in Mogadishu. With this support, we have helped clear Mogadishu street by street, raised mine awareness of Mogadishu residents and children, and trained the police forces in order to make the fight against explosive remnants sustainable. There is no time for complacency. Clearing Southern Somalia remains a work in progress. We need to continue to clear in all areas affected by unexploded ordnance, to save lives and to make Mogadishu safe for a stable future. This is part and parcel of a comprehensive EU response to enhance the security space in Somalia ranging from capacity support to the Somali National Army, training of police and supporting civilian security and of course the EU’s steadfast support to AMISOM – it is a joint effort that can make a difference” said EU Special Envoy, Michele Cervone d’Urso.

This partnership also saw the implementation of several other projects, ranging from Port Security, Police Training, and even the construction of street lights, aimed at bringing stability to Somalia. “We are particularly proud that the Federal Government, EU and UNMAS trained the first ever Somali Police Explosive Ordnance Disposal teams,” said David Bax, UNMAS Somalia Programme Manager. “The job of clearing the country of explosives will fall into the hands of the Somali Security Services. This marks the first step in developing a sustainable national capacity to tackle one of Somalia’s most pressing security challenges head-on”.

UNMAS delivered messages on how to live and work safely in a country contaminated with explosives to over a quarter of a million people, and established a “dial 888” emergency response line for Somalis to report explosive hazards. Under the project, a further 2,500 landmines and unexploded bombs were cleared in Gedo and Hiran, each one with the potential to claim a victim. This work has saved life and limb of countless Somalis, while clearing these explosives also removes the raw material for improvised explosive devices, or home-made bombs, most of which are constructed using unexploded ordnance which can befound in every region of Somalia.

Much work remains to be done. “The success of training the Somali Police Force has been extremely encouraging,” said Bax. “The next step will be to make sure that police and security forces across the country are empowered through training in ordnance disposal, that explosive remnants of war in newly liberated areas are cleared and that those who seek to do harm to the Somali people are not given access to weapons and explosives.” 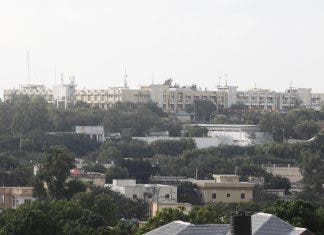