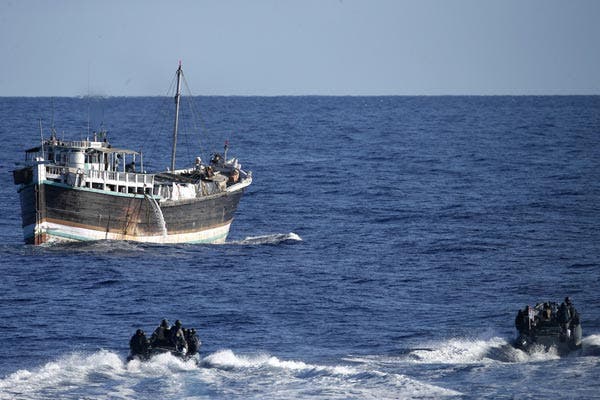 In Somali waters, illegal fishing is a pervasive problem. It triggers clashes between foreign and domestic fishers, and destabilizes Somali life.

For at least seven decades, foreign fishers have harvested Somalia’s fish with little or no deterrence. The clashes escalated with the 1991 collapse of the government. As civil war took hold and warlords scrambled to rule, the longest coastline in continental Africa, at 3,333 kilometers, was suddenly unprotected.

Amid the power vacuum, illegal foreign fishers moved in, taking millions of tonnes of fish. A new study, led by Sarah Glaser, acting director at Secure Fisheries, a project of the US nonprofit One Earth Future, shows that this fishing pressure undermined Somali coastal communities by driving unfair and unmanaged competition for finite natural resources.

While illegal fishing does not necessarily make political or natural upheavals more likely, it does weaken the capacity of Somali coastal communities to recover when disasters such as a flood, tsunami, or armed conflict do occur, Glaser says.

In that report, lead author Colleen Devlin breaks Somalia’s recent past into three distinct periods: from 1998 to 2000, conflict between domestic and foreign fishers soared; from 2002 to 2010, Somali pirates took control of the water, driving back foreign vessels; and from 2014 to 2015, piracy calmed and the foreign fleets returned, stoking a new set of tensions.

Even before the government fell in 1991, Somalia had weak fishery laws. Foreign fleets routinely ignored Somalia’s 200-kilometer maritime territory. And ships continue to encroach on the coast to fish, says Shafi ‘I Hussein Muse, dean of the fishery department at Berbera Maritime and Fishery Academy in Somaliland, a self-declared state in northeastern Somalia.

“Some of them are fishing without holding any fishing licenses, while others have managed to get licenses issued illegally by corrupt officials, mostly in the ministry of fisheries both at the state and federal levels,” Muse says.

The causes of illegal, unreported, and unregulated (IUU) fishing in Somali waters are similar to those around the world, Glaser says. Declining fish stocks cause some captains to seek fish outside of territorial waters; insufficient maritime security makes patrolling Somalia’s vast maritime territory difficult, emboldening rogue vessels; and a poor global legal structure for prosecuting IUU fishing crimes means there is little deterrence.

Glaser notes that not all foreign fishing in Somalia is illegal and legal fishing does not have the same destabilizing effects.

Yet with more than a dozen countries fishing illegally in Somali waters, and in the waters of other African coastal countries, Glaser says the international community must take responsibility for its fishing fleets.