The International Court of Justice has postponed the Maritime Delimitation in the Indian Ocean between Somalia and Kenya to 2020.

The decision follows a request by Kenya to push the case initially scheduled for next month to September 2020.

This is the second time that Kenya has been granted a postponement request with the hearing having been pushed from October to November.

“The court has duly considered the views and arguments of the Parties regarding Kenya’s request. It has decided to postpone the oral proceedings to the week beginning Monday 8 June 2020,” ICJ said in a letter to Attorney General Pual Kihara.

ICJ, however, added states that the postponement is granted on the understanding that both parties will be represented at the hearings and that no further postponement will be granted.

The time of oral arguments allocated to each party will remain as initially planned.

“Again the Court wishes to remind the Parties that the written proceedings, in this case, are already closed. The parties should proceed to the hearings in accordance with the Rules of Court,” the letter stated.

Kenya has been hoping for an out of court settlement on the matter but Somalia has insisted on letting the court decide.

On August 28, 2014, Somalia wrote to the International Court of Justice in an application to institute proceedings against Kenya with regard to “a dispute concerning maritime delimitation in the Indian Ocean”.

In its application, which was accompanied by three sketch-maps, Somalia contended that both States “disagree about the location of the maritime boundary in the area where their maritime entitlements overlap”.

It also told the ICJ that “diplomatic negotiations, in which their respective views have been fully exchanged, have failed to resolve this disagreement”.

When Egyptian President Fattah el-Sisi brokered a meeting between Uhuru Kenyatta and Mohamed ‘Farmaajo’ Abdullahi, Kenya was hopeful that a deal was finally in the offing.

The meeting on the sidelines of the United Nations General Assembly was aimed at getting Kenya and Somalia to negotiate, among other things, the ongoing maritime dispute.

So hopeful was Uhuru that he told the UN that Kenya was encouraged by the attempt to have an amicable negotiated solution to the dispute.

“My administration continues to reach out to Somalia in an effort to find an amicable and sustainable solution to the maritime boundary dispute between us,” Uhuru said in his address to the assembly.

Kenya hoping for deal even as Somalia insists on ICJ route. This hope was however short-lived after the committee of the two countries made no headway following hours of meetings and Farmaajo reported to the UN the following day that the talks had collapsed.

Kenya has previously hinted at not trusting the ICJ, accusing its northern neighbour of ignoring local and continental mechanisms to resolve the dispute.

September 19, 2016, was the first time that Kenya appeared before the ICJ and the position then was and still remains that the Court was not competent to decide the maritime dispute.

Kenya has always maintained its position that it did not consent to the Court’s jurisdiction over disputes where it had agreed to other methods of settlement, including the April 7, 2009 MoU.

The 2009 MoU had set out the agreed procedure for settlements of the dispute between the two countries, but Somalia opted to present the case to the ICJ. 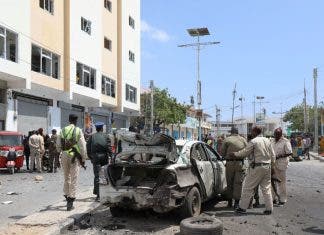