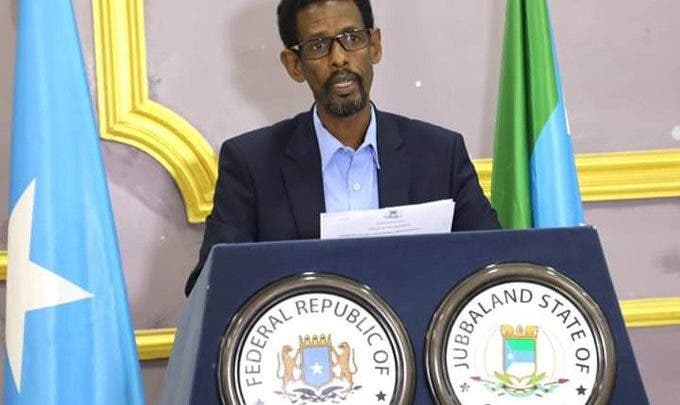 In a press conference held by Jubaland vice president in Kismayo, he said federal government is politicizing the medical aids meant to Gedo despite the region immensely  hit by flash floods and are now struggling to cope with the coronavirus crisis.

FGS authorities at Adan Adde International airport intentionally blocked the plane with essential supplies from delivering to the region amid the deteriorating flood situation.He added.

The vice president also spoke about the arrest of Garbaharey District Commissioner Iman Adow Karshe, who was flown with a private plane to Mogadishu on Monday describing the move as against the law and forceful abduction.

Over the weekend, two Somali senators have accused the federal government of barring them from traveling to the southern port city of Kismayo to attend the funeral of Jubbaland education minister who died recently.

The two senators said in a press conference that officials from National Intelligence and Security Agency (NISA) and the Federal Ministry of Transport and Aviation stopped the plane that they had boarded to Kismayo and asked all passengers to disembark.

The relationship between FGS and Jubbaland have soared since Madobe was re-elected as the regional president of Jubbaland.

However, The contest has also stoked tensions between Kenya and Ethiopia, long-time allies who both have large contingents of peacekeepers in the country and see Jubbaland as a buffer zone against Islamist attacks in their own countries.

Kenya supported the victor, Ahmed Mohamed Madobe, while Ethiopia has grown increasingly close to the federal government in Mogadishu.

It has accused Madobe of interfering in the process and has backed opposition candidates, who were rejected by the electoral commission when they attempted to register.