NAIROBI, Kenya, May 19 – Police have announced a Sh 1 million cash reward for anyone that will offer information leading to the arrest of a major terrorist facilitator, Francis Macharia Kirashu.

According to a statement issued by the National Police Service on Friday, Kirashu has been aiding terror suspects crossing into the country, mostly from Somalia, by printing fake identity cards for them.

The suspect, who operates a business by the name Paste Printers at a building located along Nairobi’s Luthuli Avenue from where his accomplices were arrested, is also said to be engaged in printing of fake title deeds, birth certificates, and academic papers.

“Kirashu’s accomplices in the fake document syndicate – Lydiah Nyawira Mburu and John Maina Kiarii have since been arrested and charged with forgery of official documents contrary to section 351 of the Penal Code and facilitating activities of terrorist groups contrary to section 9 (1) of the Prevention of Terrorism Act (20120),” NPS Director for Corporate and Communication Affairs, Charles Owino said on Friday.

Kirashu, according to Owino, is said to have processed four fake Kenyan identity cards – two of which were used by terror suspects arrested in Meriti, Isiolo in February – while readying to stage a Vehicle-Borne Improvised Explosive Device (VBIED) attack in Nairobi.

The two, Abdimajit Hassan Adana and Mohamed Nane, used the fake documents to cross into Kenya from neighbouring Somali. 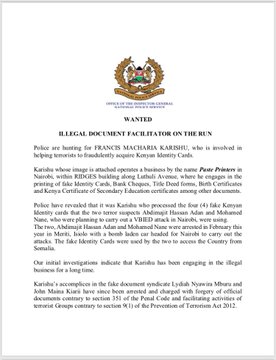 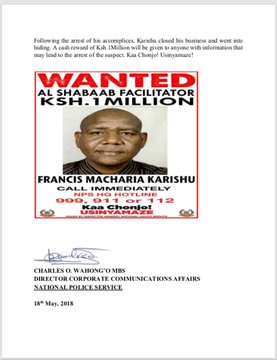 The hunt for Kirashu comes at a time when a heightened alert was issued regarding terror threats in the country since the start of the Holy month of Ramadhan.

The NPS Inspector General, Joseph Boinnet, has however assured that security has been beefed up to preempt terror threats while further asking members of the public to remain vigilant and report suspicious activities.