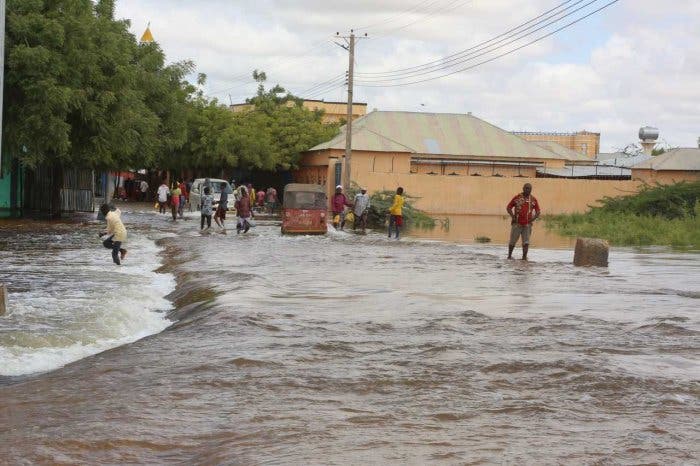 A senior United Nations official has cautioned that the political and security gains made by Somalia over the recent years could likely trigger a major humanitarian crisis if urgent action is not taken to contain the situation.

Justin Brady, head of Office for the UN Office for the Coordination of Humanitarian Affairs (OCHA) in Somalia says heavy flooding, desert locust swarms and the exponential spread of COVID-19 will lead to devastating consequences unless there is a strong and coordinated response from the international community and humanitarian actors to meet the massive humanitarian needs.

“We have a situation of the two problems of floods and COVID-19 converging and reinforcing the impact on the population, and then we have the locusts,” Brady said in a statement issued in Mogadishu.

“We expect to see a portion of the crops this year lost to the locust infestation, which will compound the food security and nutrition situation for many Somalis,” he added.

Justin Brady of the UN Office for the Coordination of Humanitarian Affairs (OCHA) in Somalia said, the country’s coping mechanisms are significantly less than those of the neighboring countries.

“Therefore, the impact of floods, locusts and COVID-19 is not simply humanitarian but has the potential to reverse some of the political and security gains that the international community has invested in over the past decade.”

Close to 500,000 people have been displaced by recent floods in Somalia’s central regions, while the country is also dealing with a severe locust infestation which threatens food security and nutrition for many. At the same time, Somalia has been responding to the COVID-19 pandemic’s spread.

Mr. Brady said the UN’s warning takes into account Somalia’s inherent structural weaknesses, which make the country far more vulnerable than the other countries in the region, and calls for an “all hands on deck approach to avert the worst.”

The UN official noted that UN has been working closely with local authorities and partners to determine and meet the most urgent needs of Somalis affected by floods including dispatching emergency supplies and providing life-saving services through partners on the ground. The assistance continues to this day.

“The UN has been deploying shelter and non-food items as well as looking at the potential for infectious diseases such as acute watery diarrhea, cholera and malnutrition that often emerge during the time of floods,” Mr. Brady said.

The UN also said the country is currently battling to fight with COVID-19 pandemic with the Health ministry reported a total confirmed cases of 2,089, 390 recoveries and 79 fatalities on Tuesday.

The UN said the pandemic has led to major socio-economic disruptions across Somalia, including a reduction in remittances from the Diaspora, itself a mainstay for many Somalis, and a reduction in casual labor opportunities due to COVID-19 restrictions, making it difficult for many to cope.

“We need to continue to work together and expand the coordination with the private sector, civil society and have more engagement with the diaspora,” Brady said.

He said the UN’s warning takes into account Somalia’s inherent structural weaknesses, which make the country far more vulnerable than the other countries in the region, and calls for an all hands on deck approach to avert the worst.

The UN Food and Agriculture Organization (FAO), with the support of other agencies, said it acquired equipment to help eradicate the locusts in infested areas in locations such as Hargeisa, Galmudug and Puntland. The infestation is Somalia’s worst outbreak in 25 years.

The FAO Country Representative in Somalia, Etienne Peterschmitt, believes that the impact of the current desert locust outbreak in Somalia could, by September, increase the number of Somalis facing food insecurity or severe hunger by half a million.

FAO said that it has strengthened the capacity for ground control with the purchase of 18 Land Cruiser vehicles, complementing another 15 vehicles hired for surveillance and control in north and central Somalia. Twelve vehicle-mounted sprayers and ten backpack sprayers have also been delivered in Hargeisa and Mogadishu, in addition to ten vehicle-mounted sprayers brought from Morocco and Mali to support control efforts in Somalia.

Three helicopters are being mobilized to Somalia to carry out aerial control operations. A new consignment of 2,000 kilograms of biopesticides has also been delivered, and more staff hired. As a result of the concerted efforts between the Federal Government and FAO, by mid-April, some 31,000 hectares had already been covered out of the 360,000 hectares estimated to be affected across the country.

Both OCHA and WHO have described the floods, locusts and COVID-19 as an unprecedented “triple threat,” which needed adequate funding to fight against.

Somalia was already struggling with floods and an invasion of desert locusts in the northern parts of the country when COVID-19 struck, further aggravating the situation by putting pressure on the country’s fragile health system, thereby causing a major public health crisis.

“Unless we are able to rapidly scale up our response operations, unless we get adequate funding from our donors, we will not be able to respond to this need of the government and that window is closing very rapidly,” sad the WHO Country Representative for Somalia, Dr. Mamunur Rahman Malik.

According to WHO, the country needs support to strengthen in the areas of case management, surveillance and laboratory diagnostics and coordination. Without this, the response to COVID-19 is hampered.

“What we are seeing in Somalia is cases remain undiagnosed, undetected, the self-isolation and quarantine measures are not working as efficiently as we expect them to work,” Dr. Malik said.

In March, Somalia launched the National Preparedness and Response Plan for COVID-19, seeking 57 million U.S. dollars for the next six months.