WASHINGTON — Somalia’s ambassador to the U.S., Ahmed Isse Awad, says U.S. Immigration and Customs Enforcement (ICE) has informed his embassy the agency will no longer arrest illegal Somali immigrants in their homes or at their workplaces.

However, federal authorities have not confirmed that there has been any shift in policy.

Awad said the agency reached the decision after his embassy expressed concern to immigration authorities regarding the recent arrests of 11 Somalis in Virginia, Minnesota and Georgia.

“Once we found out that 11 Somalis were arrested from their homes for removal, we thought the arrests looked [like] profiling and targeting Somalis. Then we submitted our concern to ICE and asked clarification,” Awad told VOA’s Somali service. “Fortunately, they came back to us tell us that they would no longer arrest Somalis from their homes or at their workplaces.”

No response from ICE

Authorities at ICE did not respond directly to questions about the claimed policy change for Somalis.

However officials have previously said that ICE does not have specific exemptions in place for certain groups of people. The agency policy currently directs that anyone in violation of immigration laws may be subject to arrest, detention and removal from the United States.

Authorities say the agency’s policy directs personnel to avoid conducting enforcement activists at “sensitive places” such as schools, places of worship and hospitals, unless they have prior approval from a supervisor.

“As of April 1, 2017, there were 4,801 Somali nationals with final orders of removal,” ICE spokesman Brendan Raedy said last week. “As of that same date, 237 Somali nationals have been removed to Somalia in fiscal year 2017.”

One of those arrested at home, Awad said, was a Somali father whose four children and wife are all U.S. citizens. Awad said, “He is not criminal, but a court ordered his removal in 2000.”

A 50-year-old Somali man who identified himself as second in command of Somalia’s National Security Service was also among those arrested. He had previously been deported to Somalia in 1996.

Awad said the decision does not mean a halt in the deportation of individuals whose removal cases have already been decided by an immigration judge.

“The U.S. law that ordered the enforcement of the removal of the individuals with aggravated criminal records is still in place, but I think what the ICE decision means is that they will not target Somalis and arrest them from their homes and workplaces.” Awad said. “They can continue their normal life.”

Most of the Somalis facing final orders of removal are not in detention centers and are unlikely to be removed in the near term because their cases are making their way through the system.

Since Somalia’s embassy in Washington reopened in November 2015, the ambassador said, about 170 Somali immigrants who either ran afoul of U.S. law or had their asylum applications rejected have been deported to Mogadishu, the Somali capital.

Most of those previously deported had applied for, but been denied, political asylum in the United States, he added. Another group of Somali applicants whose requests for asylum have been denied are now in detention centers or prisons, awaiting deportation.

Fewer than 300 Somalis are scheduled to be moved out in the next couple of months, Awad told VOA, adding that his embassy was awaiting information from U.S. authorities on who the deportees were and when they would depart.

ICE agents recently arrested 82 people from 26 nations during a five-day operation in and around the U.S. capital.

According to a statement from ICE, 68 of those detained March 26-30 had previous criminal convictions for crimes including armed robbery, larceny and drug offenses. All but three were arrested in Virginia.

U.S. immigration officials said eight of those arrested during that roundup had no known criminal records; they either had overstayed visitor visas or ignored final orders to leave the country.

Some of the Somali nationals who have been sent back to their homeland have told VOA and media outlets in Somalia they found a different and dangerous country awaiting them in East Africa.

Because Somalia lacked a strong central government for more than a quarter-century, many Western nations have refrained from forcibly returning Somali immigrants to their home country because of safety concerns.

U.S. immigration policies have been tightened considerably under President Donald Trump, and such a clemency policy for Somali nationals is no longer being observed. Trump’s travel order banned the issuance of visas to citizens of Somalia and five other countries. The order has been put on hold by two courts pending a review of its constitutionality. 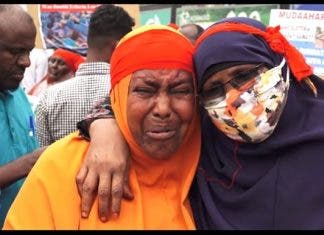