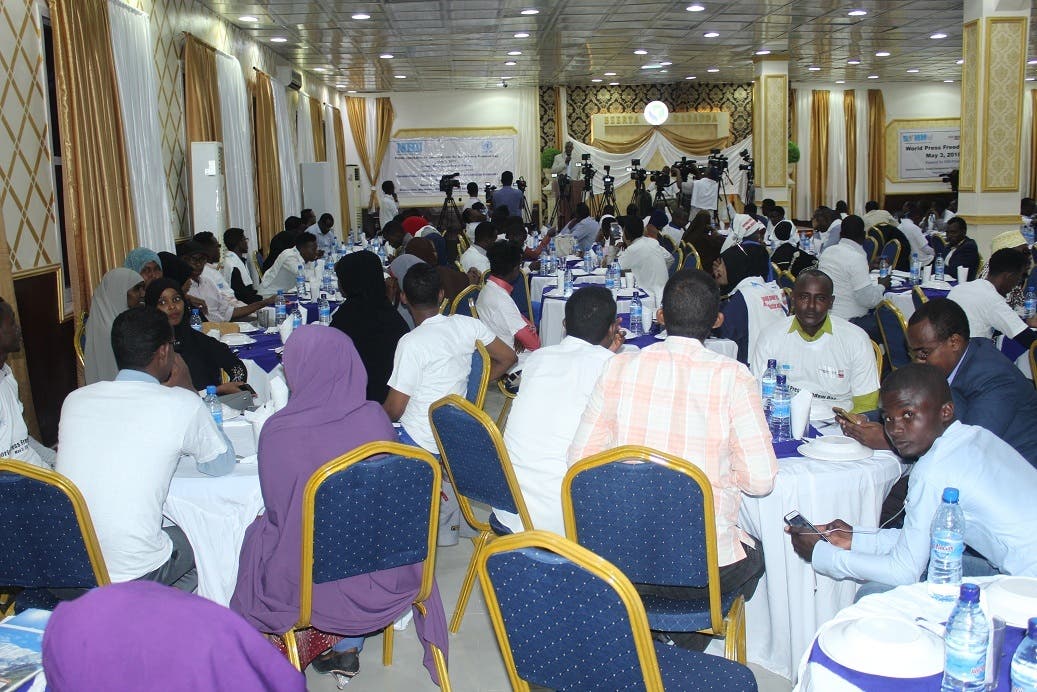 National Union of Somali Journalists and its affiliate regional member organizations organize hundreds of Somali journalists to mark the World Press Freedom Day celebrated globally every 3th of May. Hundreds of journalists in Somalia’s capital Mogadishu and the federal member states are participating in the celebrations on May 3

Every year, 3 May is a date which celebrates the important principles of the freedom of the press and to pay tribute to the journalists who have lost their lives in their exercise

Somalia still remains one of the world’s most dangerous countries for journalists as they continue to be targeted, but different voices are still pushing for press freedom. This brief statement summarizes the situation of journalists and media workers including killings, torture, arbitrary arrests and targeted attacks against media outlets since May 2018.

As the theme for this year’s World Press Freedom Day, “Journalists and Elections in Times of Disinformation, Somali Journalists and Media Workers have a major role to play in the process of democratization process for a country that has not had an election for fifty years, country that had been in a civil war more than 20 years in which rival warlords tore the country apart to clan-based fiefdoms and radical islamist groups.

Last year, Somali political leaders agreed to scrap the clan-based formula in favor of one person, one vote system. Somalia’s electoral body, the National Independent Electoral Commission (NIEC), hopes to make the change for the next elections in 2020-2021.

Situation on violence against journalists and media workers in Somalia

The year 2018 was another bloody year for journalists and media workers in Somalia. 4 journalists were killed, 9 were physically tortured and wounded, 2 media outlets were attacked. Among the four journalists killed in 2018 was Abdirizak Kasim Iman who was shot dead by a policeman in July , but his case was not resolved and the culprit was not yet caught.

When it comes to the arrest of journalists there is a decline compared to the last few years. In 2017, 39 journalists were imprisoned, while 24 journalists were arrested in the country’s various parties in 2018.
However, For the fourth year in a row, Somalia tops the list of countries where journalists are murdered with impunity

In 2018 Somalia had also witnessed a number of achievements in the area of security of journalists.

Somalia Launched the Multi-Stakeholder Forum for Safety of Journalists in 2018 with the support of UNESCO.
The security mechanism led by the eleven-person National Co-ordination Committee consists of four representatives from media associations, four from the government and four from civil society, with at least three of them representing three representing women.

In the late months of the 2018 National Union of Somali Journalists (NUSOJ), with the support of the European Union’s Office for Somalia through the Free Press Unlimited, held two peace councils in Mogadishu. Attended by senior security officials, the Justice, Journalists and the Ministry of Information and Tourism of the Federal Republic of Somalia, aiming to raise awareness among security agencies, national authorities and institutions, the civil society for the rule of law and the This is the first step in the fight against terrorism and terrorism.

First of all, we dedicate our thoughts to our fallen media colleagues who lost their lives in the line of duty. We wish to call upon authorities to stop press violations including arbitrary arrests, torture, acts of intimidations as well as crackdown of media outlets across the country and instead support and defend press freedoms as enshrined in our constitution,” Mohamed Ibrahim Moalimuu Secretary General of National Union of Somali journalists said.

“Somalia is a country recovering from long years civil war and going to achieve a democratic election, therefore the media can greatly contribute to the achievement of that goal” Moalimuu added.

“On this occasion I would like to remind Somali leaders to make their previous pledge to strengthen the freedom of expression and the media, likewise I would call Somali media to behave responsibly and professionally” Mahir Jama Aden NUSOJ President said.

• Take all necessary measures to combat the media professionals and investigate thoroughly and persecute those responsible. By doing so.
• End illegal detections, arbitrary arrests, intimidation and harassment against journalists and media workers, and between human rights violations, especially between law enforcement agencies and armed forces and strenuous efforts .
• Strengthen the justice system and the rule of law and halt the use of the Penal Code to suppress the rights of freedom of expression and press, to combat media crimes.

• We call on the Somali parliament to approve the current media law in order Somalia to have a media law that in lines with the international standard.