Paris (AFP) – Security forces moved in on the biggest migrant camp in the French capital on Wednesday where some 1,700 people lived in makeshift tents alongside a canal.

The migrants would be housed temporarily at more than 20 sites across the Paris region while the authorities checked their identities, Interior Minister Gerard Collomb said in a statement.

CRS riot police were deployed at dawn, some arriving by boat, as the migrants emerged from their tents and waited patiently to be bussed away from the Port de la Villette camp in the northeast of Paris.

“We don’t really know where we are going,” said a Libyan who reached Paris seven months ago and gave his name as Issam.

“It was hard here,” he added, holding on to his one piece of baggage.

The “Millenaire” or Millennium camp was home mainly to Sudanese, Somali and Eritrean migrants.

“The other camps will be evacuated as soon as possible next week,” Cadot told reporters.

The authorities said the dawn operation Wednesday was the 35th such evacuation in Paris in the last three years as thousands of migrants have arrived seeking a better life.

French President Emmanuel Macron has pushed a new immigration law, decried as too hardline by some associations but which he sees as essential to identify genuine asylum seekers and economic migrants.

The law, which is still being debated in parliament, would speed up the asylum process and lead to increased deportations of people who are seeking work in France, rather than fleeing war or persecution at home.

The issue of migration was thrown into the spotlight at the weekend after a Malian migrant, in the country illegally and working in the construction industry, saved a child dangling from a fourth-floor balcony.

The dramatic rescue act by Mamoudou Gassama, who scaled the Parisian apartment bloc with his bare hands, turned him into a global superstar and led Macron to grant him honorary citizenship.

Rather than Gassama’s heroics, some far-right activists have highlighted a different case involving migrants this week: that of two Afghans arrested for allegedly harassing a woman they judged to be inappropriately dressed on a train.

The Paris mayor’s office, run by Socialist Anne Hidalgo, praised the clearance of the camps on Wednesday but said that it had been calling on the national government and interior ministry to take action for four months. 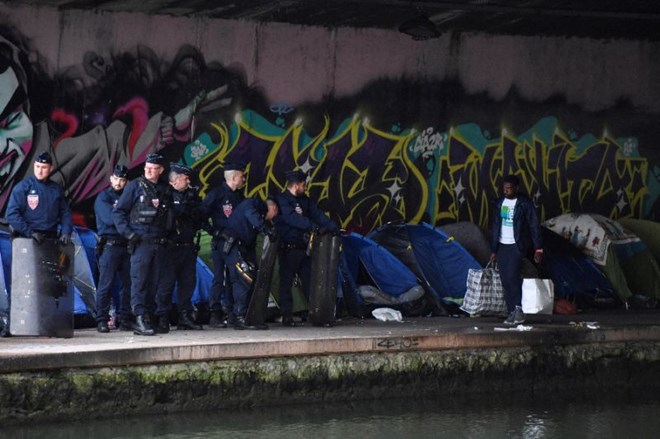