As a young Somali immigrant growing up in Houston, Mariam Mohamed searched libraries in vain for a book that included someone who looked like her.

“I decided that if I can’t beat them, I’ll join them and write my own,” Mohamed said.

About 20 years later, Mohamed shared her story and presented her book, “Ayeeyo’s Golden Rule,” to a group of Somali-American children who are experiencing the issues of isolation and discrimination that she once did.

Mohamed, a fourth-grade teacher who lives in Minneapolis, was brought to Columbus as the inaugural children’s book author-in-residence of the nonprofit Somali Community Access Network, which promotes education and literacy in the Somali community in Columbus (which numbers about 35,000).

Her three-day itinerary included visits to four Columbus elementary schools and a public appearance Thursday afternoon at the Northern Lights branch of the Columbus Metropolitan Library on the Northeast Side.

There, about 50 kids and parents listened to Mohamed, 28, discuss the teasing and bullying that she experienced after her family moved to the United States in 1995.
She recalled how, as a 9-year-old, she changed out of her hijab and into shorts and a T-shirt on the bus to school.

“I was sick and tired of kids making fun of me,” Mohamed said. “But that didn’t stop the bullying, and now I regret it. I wished I’d stayed true to who I am.

“And you should be proud of who you are, too.”

Anita Waters, director of development for the Somali Community Access Network, often called SomaliCAN, said Mariam Mohamed’s visit was funded by grants from the Kiwanis Club of Columbus ($1,900) and the Schildhouse Founders Fund ($500). 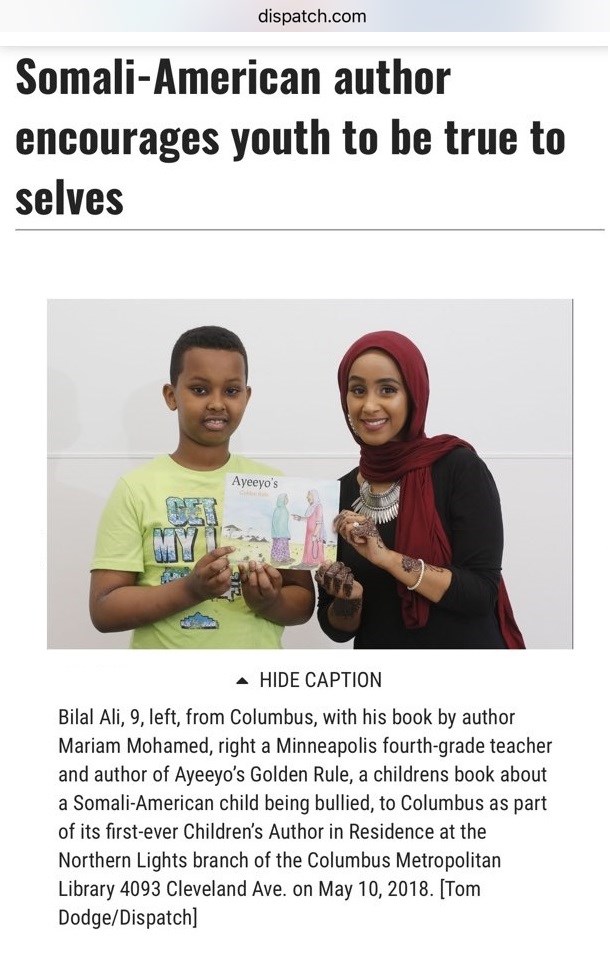 The goal is introduce Somali authors to the schools, said Jibril Mohamed, executive director of SomaliCAN, who is unrelated to Mariam.

“Kids can read these books and see things from the perspective of a Somali,” he said. “We want to promote understanding and a welcoming environment so our kids can be successful.”

Mariam Mohamed earned a bachelor’s degree in urban education in 2015 from Metro State University in St. Paul, Minnesota. She currently is working on a master’s in education at Metro State.

In “Ayeeyo’s Golden Rule,” which is partly autobiographical, a young girl heeds the advice of her grandmother (“ayeeyo” in Somali) to always be humble and kind.

The girl uses that advice when teased at her American school.

“Books teach lessons and morals,” Mohamed said, “and if the children in the book don’t look like you, you may think, ’It’s something that doesn’t apply to me, so what do I care?″

Also on Thursday, the author visited Eakin Elementary, a Hilltop-area school where, Principal Theresa Eraybar said, more than half of the 290 students have Somali heritage.

Eraybar said she was thrilled with Mohamed’s presentation, praising her as a good role model.

“For me, it was important to have someone come in who was a young Somali refugee and who was able to make the transition to the States and become a successful professional,” Eraybar said. “And her book really speaks to what my children go through.”

“It’s similar to what I see in school sometimes,” said Yasir Ali, 11, who attends Focus Learning Academy, a charterschool. “I see people try to hide themselves, and they try to change.”

Besides presenting her book (which was self-published last year), Mohamed made a point of encouraging children in the audience to write and perhaps become authors themselves someday.

She might have been successful in inspiring at least one youngster.

“At first, I wasn’t very much interested in writing, but now I am,” said Ahmed Ahmed, 9, a third-grader at Cesar Chavez College Preparatory School, also a charter school.