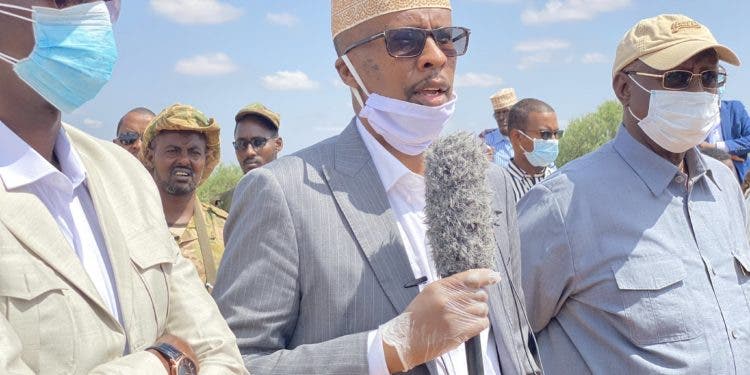 Somali Federal Government has delivered medical supplies to Buhodle and Badhan in Sol and Sanag regions as part of efforts to contain and mitigate the coronavirus pandemic.

The consignment was delivered by members of federal parliament from the region led by Minister for fisheries and marine resources, Abdullahi Bidhan.

The delegation was received by the local administration who previously appealed for the COVID 19 prevention kits.

The Minister for fisheries and marine resources, Abdullahi Bidhan said the federal government through representatives from region will always answer the calls from the city and other surrounding regions.

“The COVID 19 medical supplies we delivered today are a big boost for the locals who stood up to save their people from the pandemic.” The Minister said.

Officials in the regions have expressed thanks to the federal government of Somalia for handing over the much needed medical equipment which is vital during this difficult time when Somalia is curbing with Covid-19 spread.

Meanwhile, the Horn of Africa nation has recorded 1421 positive cases with 56 deaths since its outbreak in the country.

After emerging in Wuhan, China last December, the virus, officially known as COVID-19, has spread to over 210 countries and territories.

The global death toll from the virus has surpassed 325,000 with more than 5,000,000 cases confirmed worldwide, according to the World Health Organization.