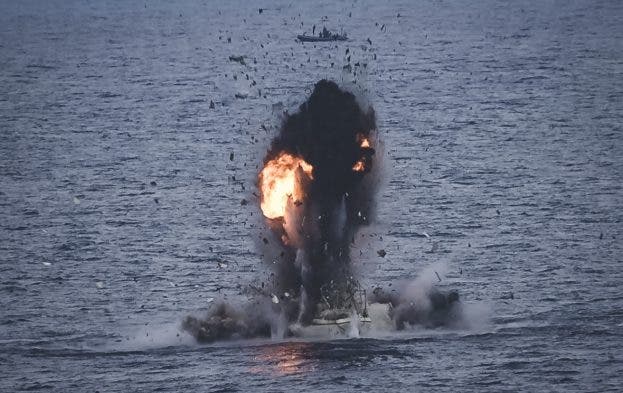 MOGADISHU (Caasimada Online)—EU NAVFOR military personnel has on Sunday seized an active Pirate Action Group (PAG) whaler and destroyed it off the coast of Somalia.

EU NAVFOR says the operation followed a sustained period of surveillance after a piracy attack was conducted against the Hong Kong-flagged Bulk Carrier KSL Sydney.

EU navy is committed to disrupting PAG’s wherever and whenever the opportunity arises and Sunday 28th October was one such occasion, according to a statement.

The attack against the KSL Sydney took place on 16th October 340 Nm off the coast of Somalia.

EU NAVFOR Spanish Maritime Patrol and Reconnaissance Aircraft (MPRA) flew over the area to gain as much detailed information on suspected pirate activity as they could.

The ability to deploy aircraft and ships immediately to this area proved vital in identifying this latest PAG.

The information the MPRA provided made it apparent that PAG whalers were active in the area, which would be used to launch further attacks on maritime shipping transiting the area.

The suspicious whaler identified by the MPRA was later tracked down by the crew of ESPS Castilla to a small bay just off the Somali coast. The Force Commander then ordered it to be seized and towed out to sea where it was safely destroyed.