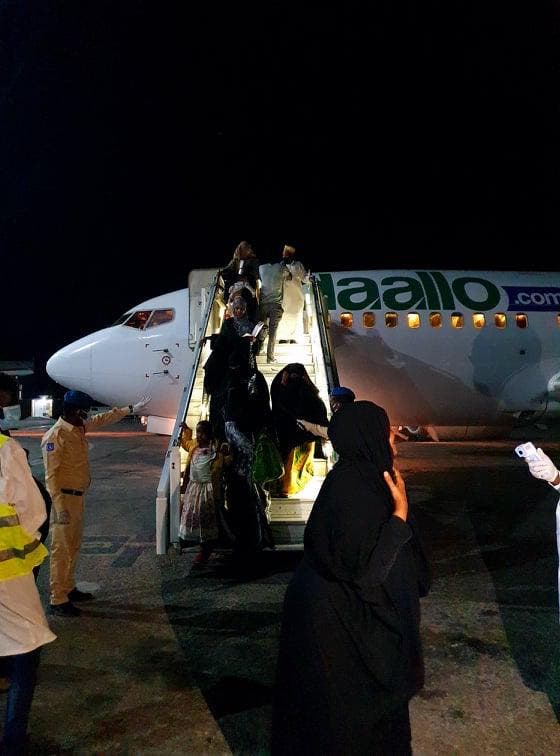 The federal government of Somalia has on Friday said it has evacuated more than 100 Somali citizens stranded by the coronavirus lockdown in Saudi Arabia.

Passengers arrived at Mogadishu’s international airport on a special flight from Saudi, and were received by government officials.

According to a video posted on the twitter handle of Somalia Ministry of information, passengers were seen stepping off from Daallo Airlines at the airport.

The ministry said the nationals were evacuated following a directive by President Mohamed Abdullahi Farmajo.

“A plane carrying 132 Somali nationals, majority of them being women and children who are part of the nationals directed to be evacuated from Saudi by the order of the president, had arrived at Adan Adde Airport,” the twitter post reads.

Somalia suspended all international travel in mid March before it went into lockdown to curb Covid-19 infections.

Somalia has in the past week evacuated dozens of Somalis citizens who were also stranded in Nairobi, The capital of Kenya due to coronavirus.

According to the alert issued by the embassy in Nairobi, those who wished to return to Somalia had returned at their own cost.

Meanwhile, Somalia has seen a spike in the covid-19 cases despite the country facing heavy flooding and a threat of desert locust infestation and the World Health Organization said it has intensified response efforts for contact tracing in Somalia by deploying some 4,000 community healthcare workers across the country.

The UN health agency has also warned that if the virus transmission is not slowed down rapidly, the patient surge and increasing demand for health care may overwhelm the country’s fragile health system.

The disease has previously been declared as pandemic by the World Health Organization (WHO) after the disease caused by the new coronavirus spread to nearly every country.

After emerging in Wuhan, China last December, the virus, officially known as COVID-19, has killed more than 360,000 people and infected more than 6 million, according to data compiled by Johns Hopkins University.