Somalia is one of the 22 African countries slated to hold elections in 2020. But Villa Somalia’s new love affair with Siyaad Barre’s model of aggressive centralisation of authority is undermining federalism and shrinking democratic space.

The year 2020 is thus a pivotal year for Somalia as  the up and coming election is a make or break event for its uncertain democracy.

Since 2011, Somalia has been pondering on how best to implement agreements on holding a “one-person, one-vote” election to replace the clan-based power-sharing, the 4.5 system that characterised elections in Somalia.

But universal suffrage in the 2020/21 election remains nothing more than a good idea whose time has not yet come. As in the 2017 election, 14,000 clan delegates will still choose 329 lawmakers who make up the Lower House and Upper Houses of parliament, and who, in turn, will elect the president.

Villa Somalia is even toying with extending Farmajo’s term in a classic “third term” style. Giving legs to this obnoxious idea, in December 2019 the lower house of the Somali parliament passed a controversial electoral law that allows a delay of elections if serious events arise like natural disasters, diseases, droughts and technical problems, the Bill states, thus enabling the incumbent to stay in office past December 2020.

But the road to the 2020 election is mired with serious ideological battles between ‘federalists’ calling for the deepening of the federal system and ‘centralists’ pushing for the centralisation of authority in Somalia.

The centralising logic indelibly linked to the incumbent and a few politicians and backed by some powerful diplomatic missions in Mogadishu is riding on the flawed belief that the Somali nation, in its current anarchy and uncertainty, requires a strong central government with all its institutions under the control of an absolute and powerful president.

Proponents of an imperial presidency in Somalia appear hell-bent on dismantling and disassembling any process which strengthens and improves a federal system in Somalia.

Uncannily, their inspiration comes from former brutal dictator Major General Siyaad Barre and his Supreme Revolutionary Council and Somali Revolutionary Socialist Party, modelled on Marxist-Leninism, which sadly pushed Somalia down the cliff in the 1990s.

Since 2018, warriors for ‘imperial presidency’ in Villa Somalia have waged an unrelenting war on the federal system. Their psychological moment of attack is during elections aimed at deepening the federalisation process. The regime has moved ferociously to forcibly remove all ‘rebellious’ federal state presidents and to replace them with loyalists.

The result are the most acrimonious and farcical federal state elections in Somalia’s history. (A new constitution to be passed by June 2020 might as well seal the fate of the federal system).

Democratic campaigns and elections have given way to gun-boat diplomacy and mercenary heists. In the Southwestern State, the Electoral Commission cleared Mukhtar Robow to contest the December 19, 2019 election.

But on December 13, Ethiopian troops, arrested Robow and flew him to Mogadishu. Violent protests ensued. At least 12 people were killed by Ethiopian troops and Somali Special Forces in Baidoa. This mercenary heist cleared the way for the “election” of the regime’s man: Abdiaziz Hassan Mohamed Laftagareen.

The regime’s effort to replicate its Southwest triumph in the Federal State of Jubaland has gone awry.

Here, on the eve of the Jubaland election, Ethiopian troops made a daring attempt to capture the Port of Kismayu and to arrest Madobe and deport him to Mogadishu as they had done with Robow.

Mogadishu, which refused to recognize Madobe’s victory, is rolling out a mercenary-style regime-change strategy.

In November, non-Amisom forces from Ethiopia arrested and forcibly took away officials in Jubaland for “refusing the work with the Somali government”. And on February 7, 2020 FGS arrested Mohamed Hussein the Deputy Governor Gedo region and immediately replaced him with a loyalist, Abdi Moalimu.

Recently, in Galmudug, Mogadishu endorsed and quickly swore in Ahmed Abdi Kariye Qoorqoor after declaring him winner in the presidential elections which were boycotted by four candidates in January 30, 2020.

Villa Somalia’s relations with Puntland have dipped. On May 28, 2019, the federal state suspended its cooperation with FGS and re-called its representatives in Mogadishu for consultations on February 6, 2020.

The creation of the New Horn Cooperation (NHC) with Eritrea and Ethiopia gives Somalia a new regional lynchpin for its centralising agenda. Wary that more autonomy for Jubaland could worsen secessionist claims within its own Somali-inhabited Ogaden region, Abiy’s Ethiopia, itself pursuing a centralist agenda, has fully backed Mogadishu’s agenda of centralising power.

Farmajo plans to use troops recently trained by Turkey, which invested billions of dollars in infrastructural projects and opened its largest overseas military training camp in Mogadishu in September 2017, to defeat the federalists and push his centralisation of power to whole new level.

By training its guns on the federalists and not terrorists, Mogadishu is giving a new lease of life to the Al-Shabaab terrorists.

In 2019 alone, the militia’s activities in Mogadishu were between 256 and 342 activities leading to 1,400 fatalities. Its war rhetoric is also undermining friendly relations with Somalia’s neigbours like Kenya.

Peter Kagwanja is the President and Chief Executive of Africa Policy Institute and former Government Adviser. 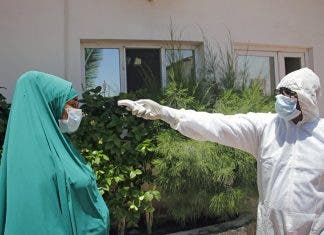 Caasimada Online - March 29, 2020
By ABDI GULED and MOHAMED SHEIKH NORAssociated Press MOGADISHU, Somalia (AP) — At first, the coronavirus was just a fairy tale, a rumor along the...

Somalia set to join the list of port states