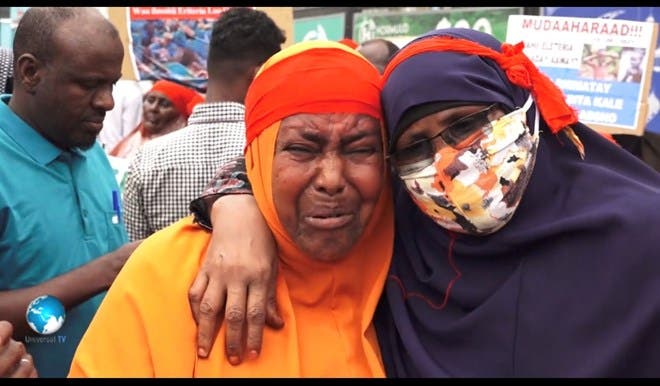 The UN Special Rapporteur’s report adds pain to the dreadful torment felt by many Somali parents. There must be accountability for this horrifying act of national betrayal.

A group of tearful parents gathers around every day on the streets of Mogadishu, seeking news of their children and imploring the Somali government for help. It is a scene witnessed in all major towns and cities across the country for more than a year. These are parents in tears, looking for their missing children – soldiers ostensibly sent to train in Eritrea by the Somali government but whose real fate is unknown.

There is the mother who had not seen her two boys for almost two years; there is the disabled father whose only son was said to have died and is looking for a confirmation of his death; there is the distraught mother who thought her two orphaned teenage boys were at school but later realised that they were somehow conscripted into a government training programme and vanished; there is the other mother who fell into depression and has been bedridden for months after she heard the news that her only son died after being shot while trying to escape from a military camp; there is the sister whose missing brother called her hours before he disappeared and was never heard of again.

These testimonies, and indeed that of many others, are the desperate worries of parents, brothers and sisters in a dreadful never-ending torment. Indeed, individual accounts that are as heart-rending as they are deeply horrifying.

A parent’s unimaginable agony and a president’s inhumanity

Imagine you are a parent that is looking for the news of a loved one and there is no one to turn to for help. Just imagine all you are looking for is, at worst, a dignified burial for your child or a confirmation that they are dead so that you can get closure. Imagine the horrifying torment that eats at your soul every day as you hear distressing stories of boys lying dead in ditches in the Tigray conflict and others seriously wounded in military camps in appalling circumstances. Imagine being a parent who received a harrowing final call from a loved one just before they disappeared and no one will help you to find out what really happened to them.

Farmaajo’s trademark has always been his tendency to hide away from responsibilities and Qalbi Dhagax is an illustrative example of his past national betrayals. What is unfolding right in front of us is another legacy of inhumanity, cruelty and indifference to suffering that is unapparelled in recent Somali history. It is one thing to traffic and trade on Somali soldiers’ lives and send them to their deaths in another man’s war, but quite another to torment grieving mothers and fathers and deny them a dignified burial of their loved ones.

What is of course much worse is that by keeping these parents in the dark and ignoring their pleas for help, Farmaajo knows their unimaginable daily suffering will continue. By ensuring government silence, he is also taking away any solace or hope these parents may have about finding out whether their children are dead or alive. He is tormenting parents who are in dreadful agony, which is the worst thing a human being, let alone one claiming to be a president, can do to another parent.

There can no words to describe what these parents must be going through.

The prime minster must make a statement

The priority now must be to bring closure to these families and free them from the agony and trauma of not knowing what happened to their children. The UN report that confirms Somali soldiers were moved from military training camps in Eritrea to the front line in Tigray is a devastating news for these families and confirm what these parents feared. It is imperative the prime minster makes a public, definitive statement about the fate of these missing soldiers and provides answers to the families as a matter of urgency.

Questions about who knew what, when and why this happened must also be investigated and answered. The collective vow of silence in government of those in the know about what happened, must stop.

This is an unfathomable crime Farmaajo committed against the people of Somalia and the prime minster will be complicit in it if he tries to cover it up or does not do the right thing by these parents. Precious lives of young Somali soldiers, some of them barely adults who wanted to serve their country, were traded as chattels for Farmaajo’s political ends and sent to their deaths in a foreign civil war.

We do not know the scale of the horrors that awaits these grieving families when the truth finally comes out. Our thoughts and prayers are with them in their hour of need.