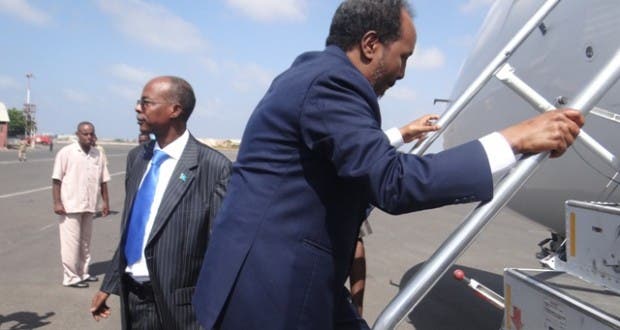 MOGADISHU (Caasimada Online)–The 8th President of Somalia from 16 September 2012 until 16 February 2017, the leadership Union for Peace and Development, Hassan Sheikh Mohamud has flown to London.

Hassan Sheikh Mohamud departed from Somali capital, after receiving an official invitation from the University of Oxford based in London, where he will be speaking on.

Mr. Mohamud says he will be in London for two weeks.

He will also hold talks with Somali community in London in support of campaigning his party to wine 2020 election in Somalia.

Caasimada Online learned that Mohamud’s trip is also part of his party campaign, and will address hundreds of Somalis in London with a vibrant audience.

In London, Hassan Sheikh Mohamud will meet with diplomats from foreign countries to support his party and discuss on challenges faced by Somalia.

The Union for Peace and Development (UPD) is a political party formed and led by Hassan Sheikh Mohamud.

He says the founding of UPD was informed and motivated by the overarching need to provide leadership geared to building a stable and progressive Somalia where every citizen, young and old can live and make a living.

“It is our understanding that the evolving dynamics in the management of state affairs require competent, professional and loyal leaders who are committed to giving their most and best to nation building”, he said.

Hassan Sheikh Mohamud was the 8th President of Somalia from 16 September 2012 until 16 February 2017.

Mohamud was born in central Hiran province, he grew up in a middle-class neighborhood of Mogadishu and completed his diploma in technology from the Somali National University.

Then after earning a master’s degree in technical education from Bhopal University (presently known as Barkatullah University) in India, he returned to Somalia and worked with various NGOs and UN bureaus during the civil war.

Mohamud remained in Somalia throughout the 21-year civil war unlike many other Somali intellectuals, serving as an educational campaigner and a peace activist.

Meanwhile, he won respect for his work in civil society and education, and was one of the founders of Mogadishu’s Simad University, where he became a lecturer and served as its dean for 10 years.

In 2012, in the first Presidential election in over 40 years, this former academic and university head was elected as the 8th President of Somalia.