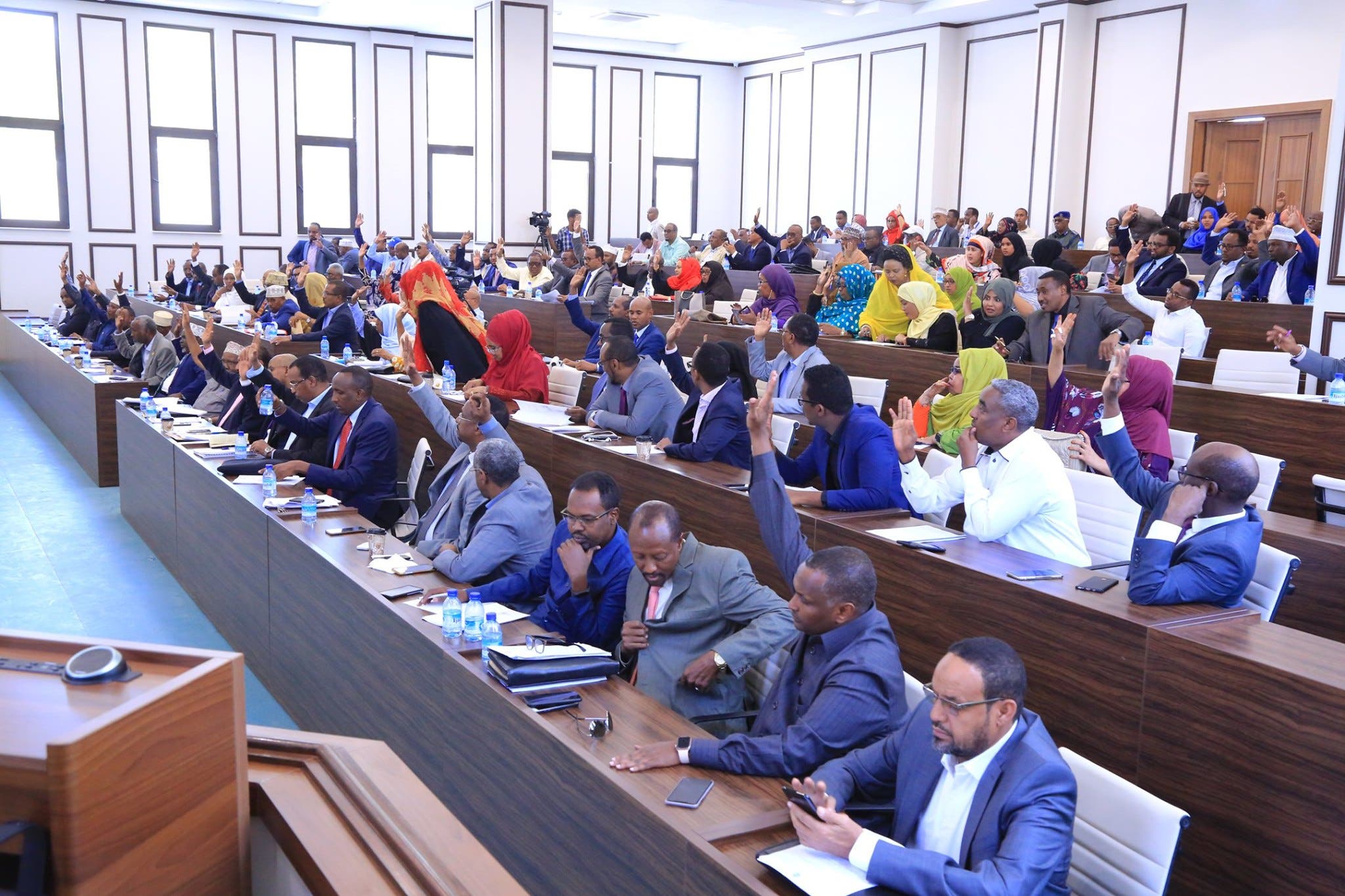 The idea emerging from Siad Barre’s so-called “scientific socialism” of the influential role of state-led by a strong man, has made way from the 1990s for lawlessness, insecurity, more abuse of power and corruption.

The military regime’s position faced a challenge from dissatisfied officers unhappy about how the 1977 war was conducted. Siad Barre’s reacted severely, with killings and disappearance of dissidents, the mass slaughter of the innocent civilians, war crimes and gross human rights abuse committed up until his overthrow and the total collapse of all government institutions followed. During this tremulous period, there come to exist groups that operated as an alternative to political parties and evolved into primary instruments of clan mobilisation, driven by an ambitious politician, often a formal military officer. These former military commanders who mobilised clan fighters to gain control of power was just as brutal and inhumane as Barre’s regime they wanted to replace. These leaders and warlords were (as Barre’s regime) indifferent to the fate of non-combatants because they see them as part of the political order they want to replace.

Living under military rule in which one man and his clan had an absolute power with no restriction affected political thinking of our society. Our people often think in terms of exclusive control, where clans aspire and claim the authority to monopolises. The dictator was the only binding factor; there was nothing outside of him as later become apparent. Strange enough, this was the ultimate argument for the dictator himself to stay in the saddle for a long time. “If I fall out there will be chaos, and nobody wants that” And “if I drop out I leave a country but no people”. It was a very perverse form of a self-fulfilling prophecy and had significant implications for what the correct change strategy was over for unbalanced dictator. The most unambiguous policy in the regard that most agrees with our sense of justice is one that the dictator was smothering democracy and freedom. Drive out the dictator, and liberty and equality will prevail.

But that this strategy does not work was very clearly illustrated by the disastrous consequences of clan militias that followed; instead of the expected democracy, the demise of the dictator brought chaos and anarchy because all sorts of groups brought each other to death and destruction. All the clans and sectarian forces that were kept under control for years by the terror movement suddenly got free rein and went to battle for power.

We’re an emotional and recalcitrant society, and we like things done quickly. During the heyday of armed opposition to the dictator rule, I was a student and activist living in Europe, SSDF, SNM, and later USC contacted me asking to join them. I refused to join their struggle, not because I was against their intention to overthrow the regime. But because I believed that a dictator could only be driven out responsibly if a new sufficiently strong new authority (binding force) has built up to fill the impending vacuum of power. The strategy of SSDF, SNM and USC and their associates fell short here; everything aimed at driving the dictator out, and little or no attention paid to building new binding forces to keep the people together.

It was clear to me that such new binding forces cannot build up from such clan-based groups. External intervention by definition by one of them means that no new internal power centre formed that is strong enough to take over the business of the country. The somewhat complex problems can never be solved with an un-unambiguous solution. The solution always consists of subtle manoeuvring between opposing forces.

Fast forward, 30 years later, we’re now the fragile federal state that organises every four years elections to choose a new parliament (lower and upper chambers). Together these two chambers, in turn, elect a president. Elected president designates a prime minister who forms a government. So far, so good. However, it turns out usually that the president does everything without much consideration of the competing interests of all clans.

Therefore, the existing election system does not change the radical change model, which based on the complete separation of opposites (black or white), where only one can be correct. Due to the character of power and the ever-increasing economic decommissioning that it can cause, the population is increasingly forced into strategies of self-reliance and protection by relying on the clan’s loyalty as a binder. Because of this character of our democracy, the opposing families are all after supremacy. Elected president’s group has privileged access to the coveted resources, such as government grants, jobs, protection, licensing, or even market goods like knowledge and credit. He only makes these available to his clan and clients who directly provide him with political, social or economic support. Elections mean one power monopoly gives way to another. What is democracy worth where the principle of winner takes all is applied?

This zero-sum mentality also exists in every administration in the country from the north to the far south. Seated leaders use brute force to protect their power and privileges. They set their army, police and judicial devices or play opponent clans against each other through bribes. Opposition politicians are intimidated, harassed, arrested or threatened with violence. When the state exercises violence against its people to suppress their aspirations, such as claiming political power or control over natural resources, people may refuse to submit itself to the law and public authority. A situation in which the state can quickly disintegrate under the influence of destructive forces.

As before, such conflicts and tensions can lead to armed conflicts. Throughout the country, there are many potential conflicts zones. This struggles all is, of course, linked to political and administrative problems precisely; bad governance, unstable governments, corruption and human rights abuses.

Philosophers and social scientists, with widely divergent philosophical ideas, use the terms “social reason (public reason) and social justification (public justification)” to describe a broad framework for a discussion in which everyone in a community can participate. Supporters of the idea of ​​social justification, consider democratic politics not so much as a power struggle settled by-elections, but rather as a kind of public conversation on issues of common concern, with a process for reaching a preliminary decision on these issues when it is time for action.

When we participate in this conversation, we try to justify our ideas to others while acknowledging the reality of political pluralism. We need to show that we live in a community with diverse political views.

We have to put forward reasons to address for all, not just as a member of our group. Otherwise, there can be no social conversation that encompasses all of the society, and we implicitly divide society into separate communities (as it is the case now). That do not try to convince each other, which is a recipe for increasing antagonism and mutual hostility between independent groups, in our case divided by clans.

There are several examples in our history of such a destructive policy introduced into our societies without public consent and of the harmful conflicts that it gives rise to, past and present. On of this destructive system is, in my opinion, federalism.

A federal system as bushed on Somalia by neighbouring states of Ethiopia, Kenya and Djibouti and financed by European Union and the United Nations will increase the antagonism and conflicts between clans and will keep Somalia weak and divided. Somalis share everything; culture, language and religion, if this were not enough to keep them together, how’s federalism can find a stronger bond to hold individual members states together? As we know in the federalism system, the federal governments and member states share concurrent powers in several areas and require responsibilities ruled by a complex system of checks and balances.

We’re already witnessing conflicts between federal governments and member states as a result of this complex and ambiguous system. It is my humble opinion that this system if it continued, will result end the idea of a common Somali state. Therefore, what we need is a centrally led democratic system which also gives regions more autonomy.

One of the merits of a democratic governmental system is that it provides a peaceful way to resolve disputes between people with fundamentally different ideas. But in an unambiguous democratic order, there are divergent models of how such a solution should take place. One of the ways is to consider democratic politics just as a method of deciding who will exercise power.

However, the federal system imposed by foreign powers is not a model of democracy that can bring Somali populations to close together.

“The great social contract theorists – Hobbes, Locke, Rousseau and Kant – all held that for a political order to be legitimate it had to be agreed upon by or justified for each person“.  Public Justification, Stanford Encyclopaedia of Philosophy.  First published Tue Feb 27, 1996; substantive revision Thu Mar 1, 2018

Let us then find ourselves a democratic system that is appropriate to Somalia’s needs rather than accepting the implanted policy from forces that has not Somalia’s interest in their mind. We have been there; let us not fall twice on the same deception.