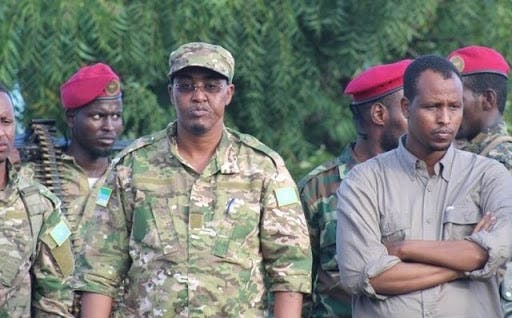 Tension remains high in the Somali border town of Balad-Hawa with reports that fugitive Jubbaland security minister dispatched more troops readying to combat with Somali army forces based in the town.

Residents have expressed fears they could find themselves at the center of fresh clashes with sounds of sporadic gunfire heard in the town and with reported advances by Jubbaland forces within the border territory.

There have also been widespread rumors across the border region that Jubbaland forces are planning fresh attacks in the town.

“We fear fighting could erupt at anytime because Jubbaland forces led by Abdirashid Janaan, who reportedly fled prison in Mogadishu, have converged near the town and could possibly carry out an ambush attack.” Says a local resident.

In March, at least ten people were killed and thousands of people displaced after a deadly clash between the two rival forces broke out in Balad-Hawo town.

The two forces were said to be seeking control of Bulahawa town within the Gedo region, with other reports suggesting that Somali government troops seeking to re-arrest the fugitive regional minister who vanished from custody in Mogadishu under unclear circumstance and sought refuge in the Kenyan town.

Somalia has in recent months called the Government of Kenya to halt its ongoing violations of the Federal Republic of Somalia’s sovereignty and encroachment in the border areas between the two countries.

Kenya has in return denied interfering in Somalia’s internal affairs, Saying the accusation made against them are baseless and fabricated for political expediency.

The relationship between two neighboring nations has gone sour after Somalia declined the maritime case to be settled out of court.

The case is due for public hearing in March next year, after the ICJ delayed it thrice, on Kenyan request.