President Trump promised to stop Syrian refugees from coming to the U.S. And he largely has, along with refugees from other Muslim-majority countries including Somalia, Iraq and Iran. The dramatic drop in resettlements means big changes for the makeup of refugees nationally and in Washington state. 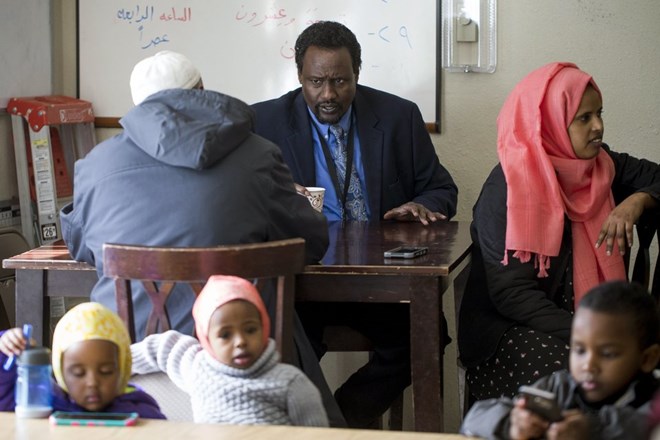 Aden Hussein, chief of community relations for the Somali Youth and Family Club, has seen the data. Because of Trump administration policies, almost no refugees from Somalia, Iran, Iraq and Syria are coming to Washington. (Bettina Hansen/The Seattle Times)

In a SeaTac gathering place for Somali refugees, the stories poured forth — of people left behind, of hopes to bring them here.

Rahmo Omar, a 35-year-old who has trouble walking due to polio, talked of a cousin who looked after her in a Kenyan refugee camp.

Fadumo Ibrahim said she is waiting for three sons in their 20s, also refugees in Kenya.

Suleika Mohamed’s husband, traveling around Africa for work when she was placed in the U.S., now lives in a tent in Uganda. Their three kids, ages 6 to 10, keep asking: “When is Dad going to come?”

On it went among a dozen people gathered around a table in a Somali Youth & Family Club office.

Aden Hussein, the club’s chief of community relations, can offer little reassurance. He has seen the data.

Just nine Somali refugees came to Washington in roughly the last six months (Oct. 1 to March 15), representing almost the first half of the 2018 fiscal year, according to U.S. State Department figures collected by The Associated Press and The Seattle Times. During the same period the year before, 210 Somalis arrived.

Refugees entering Washington from Iraq and Iran, numbering in the hundreds last year, totaled just 15 combined over the past six months. The number of Syrian refugees during that period: 0.

At a 2016 campaign rally in Everett, while the Syrian refugee crisis was being recognized as the worst since World War II, prompting Canada and Germany to open their doors wide, Trump vowed to do the opposite.

“Bad, bad things are gonna happen,” he said, if Syrians kept coming to the U.S., alluding to possible terrorist infiltrators. “This could be the great Trojan horse of all time.” 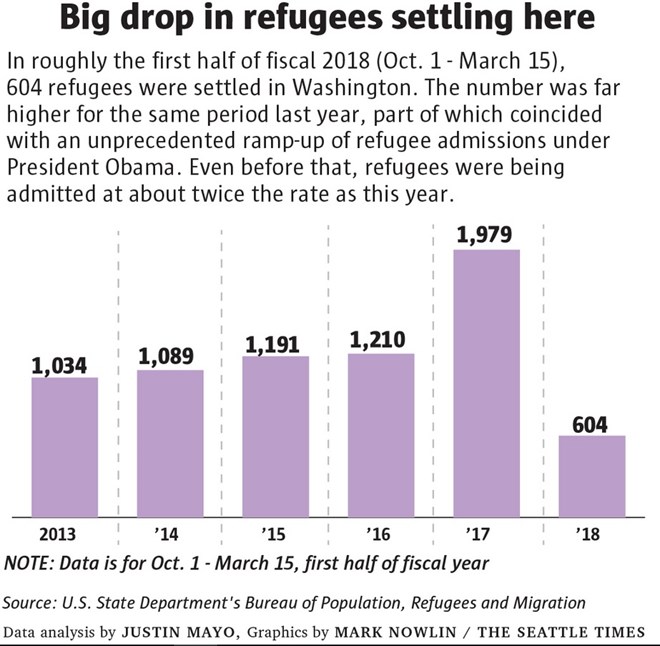 Indeed, Trump has frequently voiced suspicion about Muslim refugees in general — pointing to assaults and terrorist attacks in Europe, some involving recent arrivals. Debates here, in Europe and in Canada rage about how to guard against dangers while providing humanitarian relief.

Trump has had a hard time implementing his approach. Court challenges have halted and modified executive orders that temporarily banned either all refugees or those from mostly Muslim-majority countries.

Trump succeeded, however, in blocking most refugees from 11 countries — including Syria, Iran, Iraq and Somalia — for 90 days. That period ended in January, but the administration then imposed heightened security screenings of refugees from those countries.

“They are designed to keep nefarious and fraudulent actors from exploiting the refugee program to enter the United States,” the Department of Homeland Security said in its announcement.

“They are designed to keep nefarious and fraudulent actors from exploiting the refugee program to enter the United States,” the Department of Homeland Security said in its announcement.

Some refugees are still getting in from those countries, but the numbers over the last six months are very small: 42 from Syria, for instance, nationwide.

Trump also slashed the total number of refugees to be taken in to 45,000 in fiscal 2018, down from the 110,000 goal set by President Barack Obama. If the slow pace of refugee admissions continues, the U.S. might fall short of even Trump’s reduced figure, by as much as half. 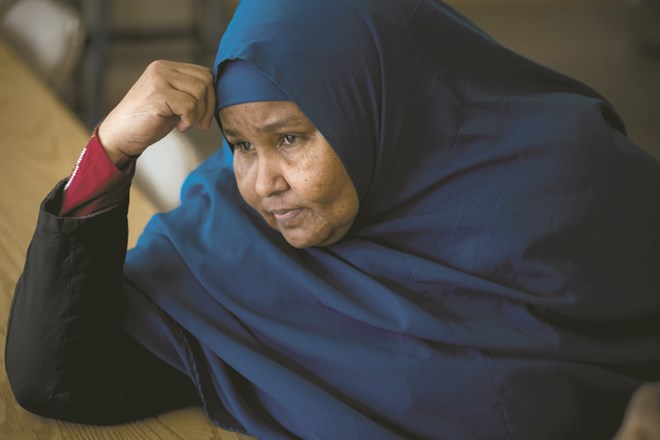 Fadumo Ibrahim, a Somali refugee in SeaTac, has three adult sons in a Kenyan refugee camp hoping to join her. (Bettina Hansen/The Seattle Times)
Local resettlement agencies say they are partially reorienting their work around services to those already here. “I don’t have to let staff go at this point,” said Nicky Smith, executive director of International Rescue Committee in Seattle, noting that two of the organization’s other offices around the country are closing.

But John Forseth, program director of refugee resettlement for Lutheran Community Services Northwest, laid off six of 10 staffers last year. He’s back up to 10, though.
Who can come, who must wait

Washington, it turns out, has not seen as sharp a drop in arrival numbers as other states — at least when you factor in those coming here on “special immigrant visas” reserved for people who worked for the U.S. government. Drawn to the state in part by support from local soldiers and veterans, Afghans with such visas continue to settle here in large numbers: 558 so far this fiscal year.

Including such visa holders, about 1,200 refugees have come to Washington in the last six months — more than to any other state besides California and Texas.

“I think the bigger story here is who is coming,” said Sarah Peterson, head of Washington‘s Office of Refugee & Immigrant Assistance.

She’s referring to the shift away from Iraqis, Iranians and Somalis, who previously represented a large share of those brought here. Now, the focus is primarily on Afghans and Ukrainians.

Ukrainians started coming here with the fall of the Soviet Union, said Andrew Kritovich, deputy executive director of the Ukrainian Community Center of Washington. “It probably initially happened kind of randomly.” But once a community was established, it drew others. 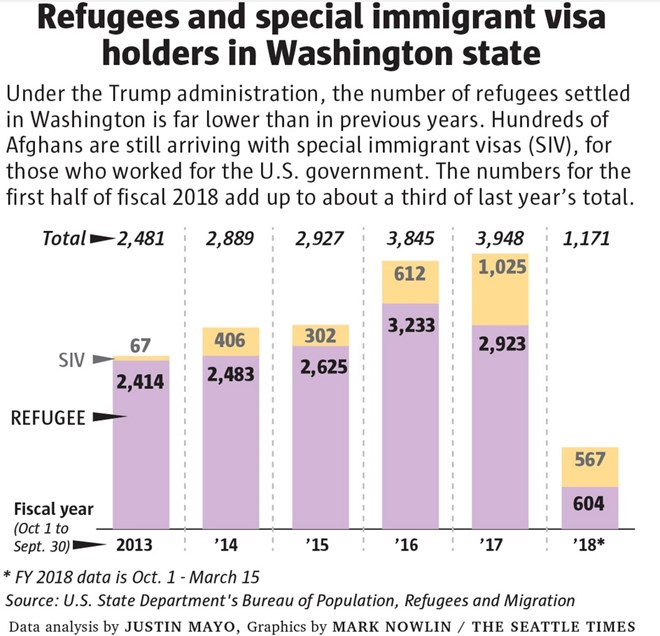 For communities disfavored by new policies, Forseth said, “the disheartening part is the families who are separated.”

Late last year, he helped Liban Mohamed, a 27-year-old from Somalia, prepare for the arrival of Mohamed’s parents and eight siblings. Living in Nairobi, they were cleared by the U.S. government to fly here in December.

Forseth’s program found the family a house that could accommodate them all, no easy feat, and collected holiday presents for the kids.

But the family’s flight was postponed, pushing their arrival into January. And then came Trump’s first travel and refugee ban, barring Somalis, among others, from entering the U.S. That meant the family would have to wait, according to a government note Forseth received.

That ban is long since defunct, but the family is still waiting, the holiday gifts for the children given away to others after sitting in the organization’s basement for a year.

“We tried multiple times to get information,” Forseth said, but it is not forthcoming.

Mohamed said his parents don’t work in Kenya, and the family depends on what he sends them from his income as an aircraft-cabin cleaner. It’s not enough for three meals a day or spacious housing. The 10 of them share two bedrooms.

“Every night, they call me and ask me, how is life in America?” Mohamed said. They are no longer sure they’ll ever find out for themselves.
Families’ hopes dim

Uncertainty also hangs over Alyas Saydo’s brother and 78-year-old mother. Saydo, an Iraqi Kurd who served as an interpreter for the U.S. Army, and who now lives in the Tri-Cities, has been trying to bring them since he came to the U.S. in 2011.

His mother had been living in a tent inside a refugee camp. “She said she can’t live there anymore,” Saydo said. So she and his brother moved to Saydo’s old house in Mosul.

But the situation is more dangerous there, Saydo said. While ISIS’ stranglehold on the city is gone after ruinous fighting, the terrorist group is still around. Adhering to the Yazidi religion, his family faces particular risks. Long-simmering tensions with Turkey also pose a threat, according to Saydo.

“All the time they are living in fear,” he said.

Rita Zawaideh, founder of a small nonprofit that helps Middle Eastern refugees, especially from Syria, said she has heard of others leaving refugee camps as their hopes of being permanently settled dim. 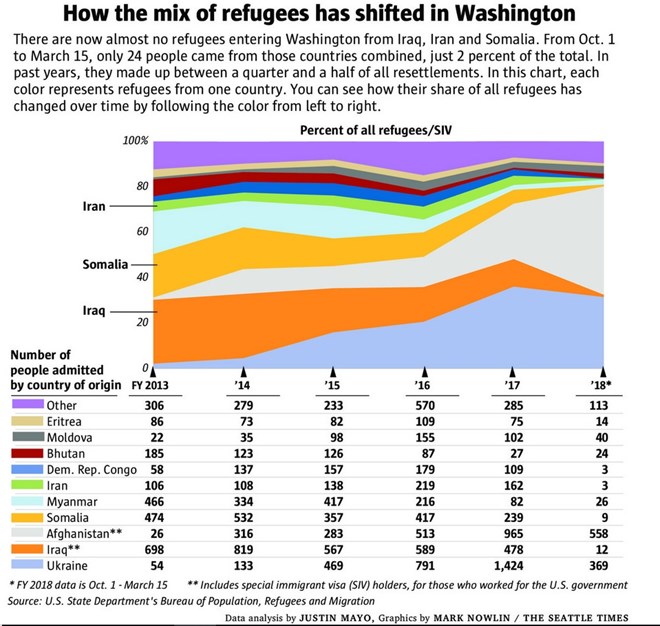 “They’re sitting in camps just waiting, for how many years?” she said. So they think: “Well, let’s just die in my own homeland.”

Syrians never came to Washington in big numbers. About 250 arrived between fiscal 2015 and 2017. Zawaideh’s nonprofit, called Salaam Cultural Museum, leapt to help all the same, and sought out donated furniture.

Offers of donations are still coming. But now, Zawaideh, said, “We’re saying we don’t need them.”

Yousif Al Asfar said he thought he would be in the vanguard when he arrived in Washington with his wife and two children in January 2016. Thousands more Syrians, he expected, would follow, including some of his five siblings.

He was surprised at what happened instead.

He continued to make a life here. When he couldn’t find a job as an environmental engineer, his profession in Syria, he decided to get American credentials. He now studies at Highline College and hopes to get a master’s degree from the University of Washington. Meanwhile, he drives for Uber.