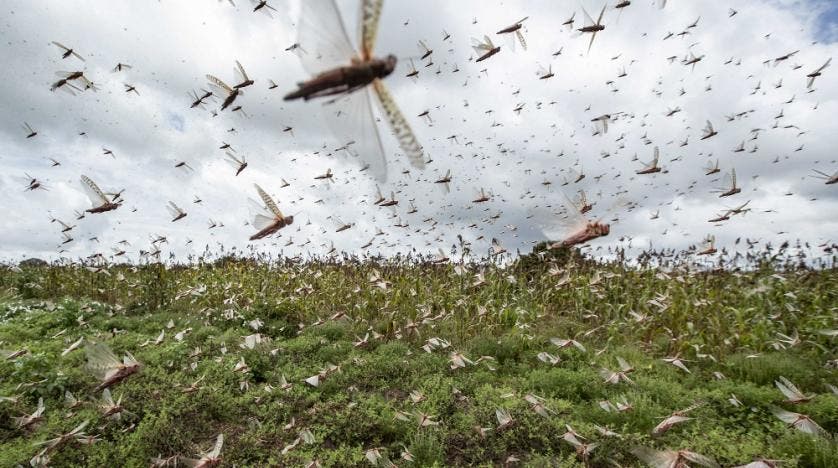 While Somalia and its partners, including the United Nations, focus on the response to the COVID-19 pandemic, other parts of the international organization remain concentrated on supporting the Somali authorities in a range of areas – including the current desert locust infestation. The pests continue laying eggs and hatching in their breeding grounds in Somalia, and a new generation threatens rural food security and livelihoods.

In this Q&A, the Food and Agriculture Organization’s Representative in Somalia, Etienne Peterschmitt, provides an update on its support to the country’s fight against desert locust.

Q. Why should the fight to curb the spread of desert locusts remain a top priority in the midst of the COVID-19 response?

A. It’s very simple: desert locusts pose a serious threat to Somalia’s food security. We cannot stop the fight or the situation will deteriorate further. We should remember that this is the worst outbreak in 25 years in the country, and it is of an unprecedented scale.  It was for this reason that the Federal Government of Somalia declared the desert locust upsurge a national emergency on 2 February. According to our latest food security outlook, the impact of this desert locust outbreak in Somalia could, by September 2020, increase the number of Somalis facing food insecurity or severe hunger by half a million.

Q. What is the current desert locust situation in Somalia and the East Africa region?

A. On the one hand, we have a second generation of mature adults laying a new batch of eggs, while egg hatching took place in the first half of April. This calls for immediate ground control operations to contain a new bigger generation. On the other hand, we have a new generation of immature adults that have begun to form swarms in Kenya and Ethiopia. These swarms can travel up to 150 kilometres a day, depending on wind conditions, and may reach Somalia during the main Gu season, ravaging young crops and pasture. Good persistent rains across Somalia are ensuring the availability of suitable vegetation to sustain the development of the third generation of desert locust in Somalia.

Q. What does that mean in terms of impact for the local population?

A. It means that rural areas and populations will unfortunately be most affected by the infestation. This includes riverine farmers, agro-pastoralists, pastoralists and rural internally displaced people. Livelihoods are at immediate risk.

Q. How is the United Nations collaborating with the Federal Government of Somalia?

A. The Food and Agriculture Organization (FAO) is leading the response for the United Nations. We have been working in coordination with the Ministry of Agriculture and Irrigation of the Federal Government of Somalia since the early stages of the outbreak. Together we have prepared a comprehensive Action Plan, which is aligned with the regional efforts coordinated by FAO – we must not forget that this is a regional endeavour. We have also recently reinforced our partnership to scale up local capacities, surveillance and control operations to combat the desert locust upsurge. We have done so not only with the Federal Government, but also with different government institutions at the state level across the country. We are satisfied with the enhanced cooperation..

Q. In a nutshell, what does the Action Plan consist of?

A. The plan has two main components or goals. The first one is to control desert locust. That includes scaling up capacities, control operations on the ground, spraying, surveillance and so on. The second pillar is to protect lives and livelihoods. As I said before, and according to the projections, we are preparing for the shocks that this crisis can trigger at the humanitarian level. With funds received to-date, we will be able to reach 24 000 families with farming inputs, and a further 30 000 households with supplementary animal feed.

Q. In practical terms, how is FAO supporting the government-led Action Plan to fight the upsurge of desert locusts?

A. FAO is providing technical expertise, mobilizing resources from the international community, procuring key items in the international market – like biopesticides, vehicles and mounted-vehicle sprayers, as well as knapsacks – recruiting desert locust officers, and providing technology like the eLocust3 GPS tracking system, which is coordinated from our headquarters in Rome. We are also coordinating the regional response in East Africa, which is fundamental in a crisis that doesn’t understand borders.

Q. How does this translate into concrete actions on the ground?

A. Well, we can say that capacity for ground control has been strengthened with the purchase of 18 Land Cruiser vehicles. They complement another 15 vehicles currently on hire for surveillance and control in north and central Somalia. Twelve vehicle-mounted sprayers and ten backpack sprayers have also been delivered in Hargeisa and Mogadishu, in addition to ten vehicle-mounted sprayers triangulated from Morocco and Mali to support control efforts in Somalia.  Three helicopters are being mobilized to Somalia to carry out aerial control operations. A new consignment of 2 000 kg of biopesticides has also been delivered. Two Somali desert locust officers have recently been hired by FAO in Somalia to support surveillance and control operations in the main breeding grounds; one is stationed in Garowe, Puntland, and one in Hargeisa, Somaliland. As a result of the concerted efforts between the Government and FAO, by mid-April, some 31 000 hectares had already been covered out of the 360 000 hectares estimated to be affected across the country.

Q. In terms of funding, FAO has recently updated its total requirement up to USD 57 million. Why?

A. That’s correct. Let me first say that we are very grateful to the international community, which has committed USD 24.2 million so far to support FAO and the government-led Desert Locust 2020 Somalia Action Plan. Our initial appeal did not cover the whole year, and this is why we have now updated it to include all needs through 2020, against a total requirement of USD 57 million. Top contributors so far include the United States and Germany, followed by the United Kingdom, Sweden, the UN Central Emergency Response Fund, the European Union, the Gates Foundation, France and Mastercard, among others.

Q. How is Covid-19 hindering FAO and government efforts to tackle this crisis?

A. We are experiencing some delays with consignments, for example with biopesticides. International experts cannot travel to breeding grounds and quarantine upon arrival is also a constraint for aerial operations. All in all, it is not optimal, but we are doing our best and remain fully committed to carrying out the response.