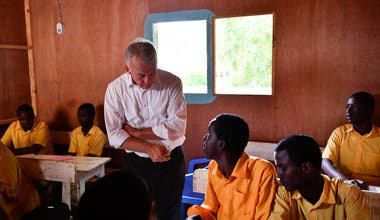 MOGADISHU (Caasimada Online) – The top United Nations official for Somalia has encouraged the country’s authorities to proceed quickly with the ratification of a treaty safe-guarding and promoting the rights of people with disabilities.

Currently, Somalia has no national or legal policy framework regarding people with disabilities, however, the federal government recently announced that it would sign the International Convention on the Rights of Persons with Disabilities.

“Somalia has agreed to sign the Convention, so the next step is to get the legislation passed and part of my purpose is to recognize that step and to encourage the government of Somalia to pass the law,” said the Secretary-General’s Special Representative to Somalia, Michael Keating.

The UN official made the comments in the capital, Mogadishu, on Sunday, while visiting the Al Noor School for the Blind, one of the few education institutions established for persons with disabilities in Somalia.

Despite a lack of precise information on the number of people with disabilities in Somalia, experts estimate that the number is higher than the global average estimate of 15 per cent as a result of the country’s long period of conflict, poverty and lack of access to health care.

Started 13 years ago, the Al Noor School for the Blind currently offers intermediate and secondary education to more than 140 students from the capital and around the country. Subjects taught at the institution include mathematics, languages (English, Arabic and Somali), Islamic studies, computer and social studies.

Mr. Keating, who also heads the UN Assistance Mission in Somalia (UNSOM), mingled with the students during his visit, and noted the importance of the government making provision for funding such schools, as well as the need to create job opportunities for them.

He highlighted that Somalis with disabilities form a crucial part of society, and that there is need for their inclusion in the political, social and economic affairs of the country.

“I was talking to another colleague who was working here and they said the priority should be to make sure that political parties include in their rules support for people living with disabilities,” Mr. Keating said. “Similarly, it would be great if we had MPs, both at the federal level and around the country, so that they can represent those, whether they’re blind or have other forms of disability, who have basic needs and deserve support and want to be full members of Somali society, so that they [the MPs] can act on their behalf.”

The school’s deputy director, Ibrahim Abdullahi Mohamed, who showed the UN envoy around the campus, expressed appreciation for the support shown for the school’s efforts, noting that it faced numerous challenges and needed aid.

“The school lacks equipment like the braille, which is expensive and not available in the local market,” he said, adding that staff also required training to stay up-to-date with the latest technological developments for aiding blind people.

“I am full of admiration for the work that the teachers and the school are doing, but clearly much more support is needed, and these very enterprising students need help and the school needs help,” the UN Special Representative said. “It’s great that this is happening but we need to do much, much more.”

“[It’s] tough,” he added, “because there isn’t a lot of money around, but I hope that if the government makes this a priority then the international community will also be supportive.” 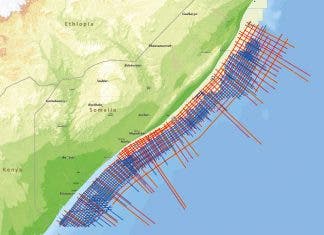