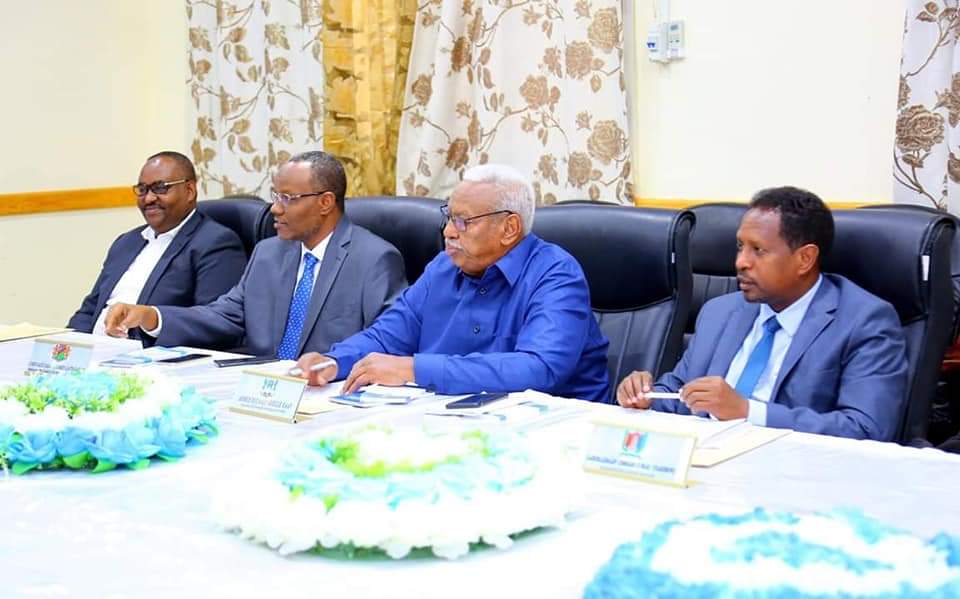 “The principal failing occurred in the sailing, And the Bellman, perplexed and distressed, said he had hoped, at least, when the wind blew due East, that the ship would not travel due West, The Hunting of the Snark by Lewis Carroll”.

While in the ebb tide of the Puntland presidential election, all of the sudden the discourse and the rumor mill, mainly originated and circulated among the coffee shops’ respective groups went into over drive in Garowe. What is the issue warranted itself to that magnitude of traction: yet another get-together of central characters sitting in the top table of federal government, namely the president and prime minister on one hand, and the federal states’ presidents on the other. This retold one in 1777 during American civil war after General Burgoyne’s defeat at Saratoga, a young British aristocrat said to Adam Smith, who heard the news at comfort of his Glasgow abode “this is going to ruin the country”, and Adam replied “there are great deal of ruins in a nation”. Now, there has been great deal of fleeting brain storming scramble for the best part of the last thirty years in Somali political elites, and a one of ruins and great predicament for the majority of lower tier of the nation. The question comes into the fray will be “is this yet another piece of copper-bottom none sense and verging into the squalid or these guys, who are this time round in the helmet of setting out the future of curse stricken people of Somalia, are thoroughly honorable men, who are taking a big political risk, putting their own political reputation/future in the line and standing with something they are fundamentally believe in and agreed with the majority of the people they represent, or had a day trip to Damascus and came back”.

One has to admit that one seldom follows the longest hogwash in the history of humanity after the treaty of Westphalia and protracted Christian civil war occasioned, in the end, the splinter of protestants of the Catholic fold. Every now and again a group of political elites rise up from the ashes of their predecessors and found a light on the road to Damascus, of which I and many more Somlian, on the level of looking at the protracted shenanigans of Somali nation state, are denied it.

While still mulling about putting this piece of analysis together one chanced upon an aquatint who is in the thick of it, the Somali political jiggery pokery, and whispered into my ears with enthusiasm that the top men isolated themselves in a room, implying in here that they are very series about the issues. One more time I promptly asked my interlocutor “what about it they are series to crack, “the issues” he said again. For this particular point, in the history of negotiation, I’ve never read or heard individuals at the top table of the ladder of national power isolated themselves, without even minutes taker, and discuss, debate and finally flash out the differences thus make some inroads/movements for the future of their respectively represented people. On the contrary, the top leaders gather when everything is being debated and ironed out by first the civil servants and then ministers. Perhaps, the top men of Federal Government and its corresponding Estate heads are redrawing conventional political negotiations and venture into new territory by achromatically oxidize Government institutions into irrelevance in lifting the multifaceted calamity that has been lingering too long for Somalis. The weird situation Somalis endured such a long time transcended/fledgelled into a deep seeded culture that will have been hard for the future generation to dislodge in the governance of their nation-state. As history always goes backwards, the price the future generations will repay is dear in here.

Coming back to the summit shaping up in Garowe, I fielded several question in an attempt to explore what is the bone of contention in here that warranted to spend comparatively huge amount of unaffordable money to bring these guys into one place.  Apparently, it should have been succinctly clear for everyone concerned, the leaders and their subjects alike, what the main items of the summit are. Without a shred of prejudice, the contours of the replies are blared and some of them made me to tear my hair out to comprehend it. Again, more often than not, some of the lads/lasses got flat-footed by my banal questions on what are the main agendas the leaders of this nation pondering about.

The modality of 2021 federal government election; the security; federal member states not getting the share of the money, through the federal government, International community equates up on Somalis; Anti-terrorism agenda; The Prime Minister want to do away with the president of Galmudug, with whom they are not in good terms, and replace one of his choosing are the main answers bouncing back into my face on queries regarding the agenda of Garowe gatherings. To ascertain what I heard from the folks, I sift through the social media starting with Puntland, mind you this nation are divided according to clan lines since 1991 civil strife, the president went into airwaves, clearly stating that the main agenda of the gathering is brainstorming and exchange of opinions by the Federal Government leaders and Federal Member State’s presidents. the profusion of Somali websites seconded the Puntland’s president locus. For example, some of the websites explored further and elaborated the top agenda as a National Brainstorming by those at the top tables of hitherto Somali leadership regarding the predicament this nation has been into for almost three decades. The first day was focused on updates by the respective state’s leaders and Federal Government ones. The second day is to get into the details of the agenda of the meeting without knowing the Agenda itself and the duration of the meeting.

Picture of the leaders sitting in a round table with no one sitting second row of the bench had been circulated in the social media. Who takes the minutes was the first sprung to mind. Secondly, are they talking about private business or that of governing Somali. It reminded me president Trump, couple of months into the presidency, inadvertently made a call to president Putin. That caused furor as he broke the protocol of the presidential matter by talking another peer without the proper channels. This dude is trump in the president of USA, not running his private business. In this case, the Somali leaders must at least comprehend that they are in the business of governing the country and every think as a minimum must be minuted for the posterity. More fundamentally, the agenda of their summit must be well-thought out, the machinery of their respective executives thoroughly worked out and put in front of them in their meetings. The same goes to even when they are either receiving or visiting other foreign partners. I say so not that they don’t understand, but its something gaining ground for so long, since the demise of Somali state, and business of governance got compromised. Its high time to put things into better order and get back to the norms of governance. Which reminded me the saying “I have been down for too long, when I got better, I forgot how to walk again”, how fitting to the Somalis.

Penultimately, over the years and following the unique issue, to which I call the variant of the European wars of religion ended by The Peace of Westphalia in1648, of painful saga of Somali proper that bedeviled every single person with honest and integrity except to those took the helmet of representation of Somali political leading. They pitted Somalis one another to cater for their personal betty gains. Now, as stated in the opening salvoes of this short essay prompted by your meeting, make your gatherings a fruitful one by first becoming honest on the difficult agenda of foisting Somalia off the deep pit it has been for so long. and secondly, tell the people what will be your collective position if the Nation-state were to reconstitute. The mellowed modus operandi of your predecessors since 1991 was one of personal political and financial gains which proved to have been chaotic and detrimental, and the people who suffered most has been the ordinary everyday man and women on the streets. Since it has been such a long time for the people of Somalia experiencing bad leadership after another, it proves difficult for you guys get the benefit of the doubt. Never the less, I recall my opening paragraph in here, since plebeians are not franchised to elect their leaders, you have the good Samaritan of the people, and hoped this time round you, the presidents, the prime minister and the mayor of Mogadishu will demonstrate to be  thoroughly honorable men, who are taking a big political risk, putting their own political reputation/future in the line and standing with something they are fundamentally believe in and agreed with the majority of the people they represent, or had a day trip to Damascus and came back”.

Finally, I recall Malcom Rifkind, who was in Margret Thatcher’s cabinet, talking about her character and if she believes consensus, and she replied “yes I do believe in consensus if only it should be behind my conviction. So, you all are desperately expected to reach a consensus for whatever disagreements bedeviled the reconstitution of Somali and the future of this nation. If again its verified otherwise two, three, four or five years down the road and you are faced out and in came new yet another imposters who pretentiously run errands in the name of Somali people, it’s continuation of the suffering and deep into the unscalable quagmire for the people and the Country as a whole. “The principal failing occurred in the sailing, and the Bellman, perplexed and distressed, said he had hoped, at least, when the wind blew due East, that the ship would not travel due West, The Hunting of the Snark by Lewis Carroll”.

Synopsis of the essayist

Disclaimer: The views expressed in this article are the author’s own and do not necessarily reflect Caasimada Online’s editorial stance.