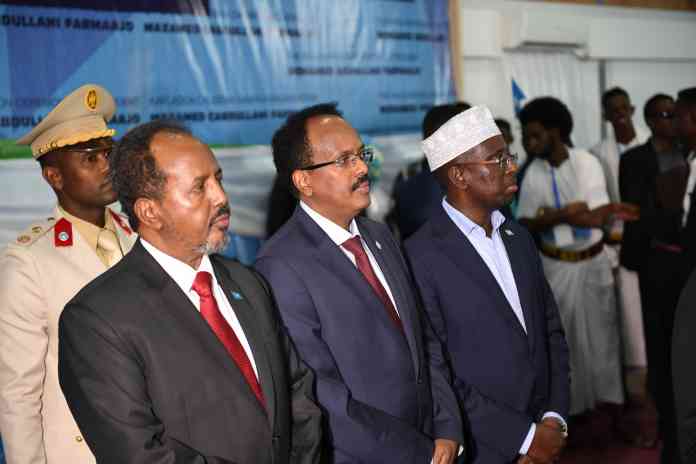 The first universal suffrage poll is this year, a first in 50 years but wrangling, lack of proper laws, money and security, have conspired to make it impossible

Hassan Khaire, a former oil executive and humanitarian worker, may never have guessed that Saturday July 25 was going to be his last day as prime minister of Somalia.

The manner in which the Somalia House of the People, or the Lower House, squeezed air out of Khaire must have been embarrassing but was always looming to the man who was always in tailored suits and composed.

It began as a usual extraordinary meeting centred on issues of elections. Then, the Speaker of the Parliament Mursal Mohamed Abdurahman announced that there was a need to assess the level of legislators’ confidence in the Executive led by Prime Minister Khaire.

In Somalia, the PM is appointed by the president, who then appoints and manages the government, hence determining the legacy of the incumbent.

“We are going to hold a vote of confidence on the government,” proclaimed Abdurahman, departing from the tradition where parliamentarians often stick to the order paper.

A small group of MPs, some Cabinet members started protesting, calling the process illegitimate, among them Minister for Internal Security Abukar Islow.

The voting and counting were a spectacle. According to sources, no motion was drafted, and the item was not listed on the order paper for that day’s session. The source added that it was set up without the requisite signatures of MPs, normally a third or so. Once the vote was set up, the Nay votes were eight and Ayes had it with 170, no abstention.

Speaker Abdurahman declared the vote valid and subsequently announced, “the government has fallen,” and ended the session.

Within an hour, President Mohamed Abdullahi Farmaajo accepted the outcome of the parliamentary vote, promising to nominate a new prime minister. He said he would not interfere with the “independence” of parliament, a rare comment from a leader who had routinely bickered with the legislature.

But Khaire’s departure left his shadow looming all over Mogadishu.

First, some Cabinet loyalists whispered among themselves of the legality of the move. Then opposition parties like Wadajir and the Forum for National Parties (FNP) took cue, criticising the timing of the ouster.

“The House of the People did not follow due process in removing the prime minister from office,” said Wadajir, led by former Planning Minister Abdishakur Abdirahman.

“The party believes that the biggest reason the Prime Minister was removed is to derail the Dhusamareb agreement,” it added, referring to the meeting of Farmaajo, Khaire and federal state presidents earlier in the week in the Galmudug state capital a fortnight ago.

They agreed to have timely elections, and appoint a joint committee to recommend mode of elections.

With Khaire gone, questions emerged on whether a government under a new premier will continue with the agreement or will propose something new, essentially killing the arrangement for timely elections.

“Unconstitutional extension is not an option at all. Also, trying delay tactics will only make the situation from to worse,” said Hassan Sheikh Mohamud, Farmaajo’s predecessor and now a member of the FNP whose patron is Sheikh Sharif Ahmed, another ex-President.

“It is the red line one should not attempt to cross. However, the situation looks bleak, I am sure Somali people will always keep the candle of hope lit.”

Somalia was expected to hold universal suffrage elections this year, a first in 50 years. But wrangling, lack of proper laws and money, as well as security, have conspired to make it impossible.

Still, leaders had been haggling over whether to hold elections anyway or delay them for a better model.

The recently concluded series of meetings in Dhusamareb town, the capital of Galmudug State in Central Somalia, were assumed to have been initiated by the bloc that desires to have the indirect voting in the Horn of Africa country, which they see as a quick and simple way of accelerating the voting process.

If successful, they may kill the possibility of Farmaajo’s return to power because their chance of manipulating the voting through clan elders is high.

The international community, in the meantime, articulated dismay and voiced caution on what happened at the Somali parliament.

Somalia’s international partners issued a statement on Tuesday, four days after Khaire’s sacking, expressed their concerns and their strong hope that recent developments, including in the Federal parliament, will not create instability that may reverse the gains made so far on national priorities.

Hussen Mohamed Mohamoud, a political analyst at Hamarweyne district in Mogadishu, believes Farmaajo could gain the upper hand if he picks the next PM from an influential circle.

“If Farmaajo strikes a deal with the political parties he may overthrow the indirect voting desired by his opponents,” Mohamoud told the EastAfrican.

“He can even create a circumstance that forces extension of the term of the state institutions — the presidency, the legislature and the executive — in a nation saving compromise,” he added, pointing finger at Somalia’s international partners as impartial arbiter.