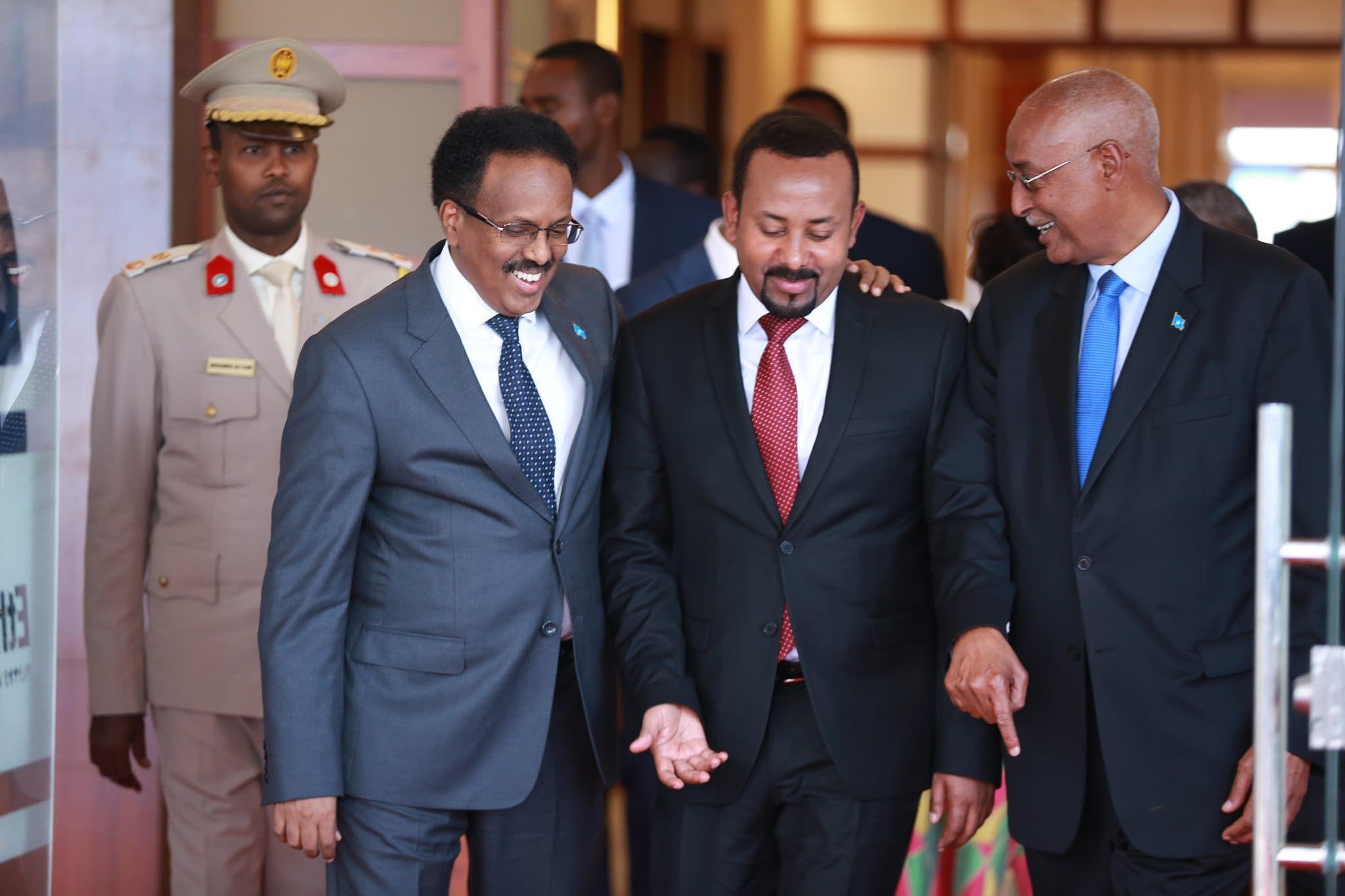 In November, as the Ethiopian government escalated its military campaign against the northern Tigray region, Prime Minister Abiy Ahmed quietly ordered a drawdown of Ethiopian peacekeepers from neighboring Somalia. The scale of the move is still unconfirmed, but as many as 3,000 Ethiopian troops were reportedly redeployed to fight against the regional ruling party in Tigray, the Tigrayan People’s Liberation Front, or TPLF. Around 200 to 300 ethnic Tigrayan soldiers in Somalia were also disarmed, and some may have even been purged from the ranks.

The Ethiopian troops’ departure injects additional uncertainty into Somalia’s already precarious security situation, as it struggles to hold federal elections that were scheduled for this month, while containing a long-running insurgency by the violent extremist group al-Shabab. The situation is further complicated by escalating tensions between the federal government, based in Mogadishu, and Somalia’s semiautonomous regional states—a standoff that bears similarities to Ethiopia’s conflict between the federal government and Tigray. Both Abiy and his Somali counterpart, Mohamed Abdullahi Mohamed—who is more commonly known by his nickname, Farmajo—have sought to centralize executive authority within their respective federal governments despite sustained and increasingly violent opposition by powerful rivals.

Although Tigrayans make up only around 7 percent of Ethiopia’s population, the TPLF has played an outsized role in Ethiopian politics for decades, largely due to its leadership of the military campaign to overthrow the old communist dictatorship, the Derg, in the 1980s and early 1990s. In 2006, the TPLF-led government sent troops to Somalia to help secure the country’s nascent transition to a federal government after decades of civil war. Ethiopia later joined the African Union mission against al-Shabab as a troop-contributing country in 2014. These deployments helped foster ties between the TPLF and regional state leaders in Somalia, particularly in the south, where al-Shabab is most active.

When Abiy took office in 2018, however, he promptly began sidelining the TPLF, including by dissolving the old ethnic federalist coalition, known as Ethiopian People’s Democratic Front, and replacing it with a single, pan-Ethiopian political party that the TPLF refused to join. Abiy’s campaign to create a strong central government resonated with Farmajo, who has similarly sought to curb the authority of Somalia’s semiautonomous states. Abiy’s efforts to defang the TPLF and remove ethnic Tigrayans from the ranks of peacekeepers in Somalia can thus be seen as part of a burgeoning partnership between the Somali and Ethiopian leaders, united by their mutual desire to centralize federal power and weaken the political influence of domestic rivals in both countries.

Abiy and Farmajo share a mutual suspicion of the TPLF’s enduring influence within the Ethiopian military and security services. This deep-seated mistrust likely informed the disarming of Tigrayan peacekeepers in Somalia in November, which Abiy’s government defended as an effort to root out the “infiltration of TPLF elements in various entities.” Prior to the recent drawdown, Ethiopia had nearly 4,000 troops assigned to the United Nations Mission in Somalia, or AMISOM, targeting al-Shabab, and an additional 4,000 troops supporting a separate bilateral security agreement between the Somali and Ethiopian governments.

Farmajo is running for a second term in a presidential election that is scheduled for next month, but is likely to be delayed. If his reelection bid is successful—not a certain prospect—his political survival would be influenced by the outcome of the Ethiopian offensive in Tigray. Sporadic fighting is continuing despite Abiy’s declaration of victory in late November, after federal troops captured the regional capital, Mekelle. A decisive defeat of the heavily armed and well-trained TPLF troops would strengthen Abiy’s grip on the military, and may also weaken the TPLF’s historical ties to allies in Somalia, especially those in its southern and central federal member states.

An enduring guerrilla insurgency in Tigray will likely stress Ethiopia’s military resources and raise the prospect of additional drawdowns from the Somalia mission.

Here, Farmajo’s efforts to marginalize his political opponents have been bolstered by Ethiopia’s military presence. It is also in these Somali heartland regions, the epicenter of the al-Shabab insurgency, where Farmajo’s efforts to expand federal authority have faced the most resistance. In 2018, he intervened in a local election in Somalia’s South West state to prevent a former al-Shabab leader and defector, Mukhtar Robow, from competing in the state’s presidential election. Farmajo’s federal government reportedly orchestrated Robow’s arbitrary arrest and detention by Ethiopian security forces, leading to his withdrawal from the race, and the subsequent election of a Farmajo ally.

And last March, Farmajo unsuccessfully tried to intervene to prevent the reelection of Ahmed Madobe, a key political opponent who serves as president of Somalia’s southernmost regional state, Jubaland. Here, again, Farmajo leveraged Ethiopia’s military presence and political support in a bid to unseat an incumbent and expand the federal government’s writ of authority. This effort sparked violent clashes between federal troops and Jubaland’s forces, and drew in both Kenya and Ethiopia—two troop-contributing countries in the AMISOM mission that stand on opposite sides of the fractious dispute in Jubaland.

Kenya has long supported the Jubaland administration of Madobe, a former ally of al-Shabab who now opposes the group. Madobe led the 2012 military campaign that ousted al-Shabab from Kismayo, the regional capital, and has since enjoyed Kenya’s military and political backing. Madobe also has historical ties to the former TPLF-led government in Addis Ababa, dating back to Ethiopia’s military campaign against Islamist extremists in southern Somalia during the 2000s.

Today, al-Shabab has been beaten back from Jubaland’s cities, but it still maintains a presence in rural parts of the state. Kenya, which has suffered from deadly al-Shabab attacks in the past, views Jubaland—and therefore Madobe—as an essential security buffer on its northeastern border with Somalia. Abiy, on the other hand, is suspicious of Madobe’s historical links with the TPLF, as well as other Ethiopian groups that are opposed to Abiy’s agenda.

These tensions imperil AMISOM’s already beleaguered campaign against Al-Shabab, which took a hit from the sudden withdrawal of U.S. troops that President Donald Trump ordered last month. National interests have long driven countries’ decisions on participation in the AMISOM mission, but the rift between Kenya and Ethiopia—and each country’s divergent support for rival domestic factions inside Somalia—fundamentally weakens the AMISOM mission. These tensions may not spill into direct confrontation, but they create an additional wedge that the resurgent al-Shabab can exploit to advance its military and political objectives.

The conflict in Tigray only exacerbates these exigent rifts. An enduring guerrilla insurgency in Tigray will likely stress Ethiopia’s military resources and raise the prospect of additional drawdowns from the Somalia mission. A conclusive TPLF defeat, on the other hand, would embolden Abiy’s centralization campaign—an outcome that would resonate in Somalia and strengthen Farmajo’s like-minded agenda.

While prospects for a negotiated settlement in Tigray are still uncertain, it presents the best opportunity to mediate the Ethiopian federal government’s rivalries with the TPLF and other regional state rivals. Such an outcome could also provide a viable blueprint for the negotiation to ease federal-regional tensions in Somalia, where the effects of the Tigray conflict will likely reverberate for many months to come.

Peter Kirechu is the former director of the Conflict Finance and Irregular Threats Program at the Center for Advanced Defense Studies (C4ADS). He is a specialist on illicit transnational networks in the Middle East and Africa.