SHARJAH, United Arab Emirates: Wooden dhows crammed with second-hand Japanese cars have been sailing unhindered into Yemeni ports for the past three years despite rigid wartime controls on imports of aid and other vital supplies. Like many Yemeni traders, Ali al-Mahry jumped at this chance to turn a profit by supplying customers at home with cars bought cheaply at auction in the United Arab Emirates.

A Saudi-led military coalition, of which the UAE is part, has been battling Houthi rebels since 2015 with the aim of restoring the Yemeni government in exile.

The coalition has imposed controls to deny arms to the Houthis, fighters aligned with Iran who control the capital Sanaa and Hudaida, the largest port. The measures have choked off supplies of fuel, food and medicine to Yemen, where millions face starvation and disease.

Yet coalition forces appear to have turned a blind eye to the dhows that regularly carry cars from Port Khaled in the emirate of Sharjah to a small dock at As Shihr, a port in Yemen’s Hadramawt province controlled by UAE-backed forces.

“I make this journey around 30 times a year,” Mahry said, surrounded by 180 cars taking up every corner of a dhow he has chartered for the voyage. “I sometimes also ship food and other items, but they require different permits.”

The cars have become a nice earner for traders in both the UAE and Yemen. Yemeni dealers gather daily at Dubai’s Al-Aweer Auto Market to bid as a big screen flashes prices for Japanese cars, with as many as 80 sold in a day at one auction house.

Once sold, the automobiles are taken to Port Khaled, where up to 200 vehicles are stacked onto each dhow. The vessels are searched at Port Khaled and on arrival at As Shihr but have not been required to obtain permits or pay customs duties for the past three years, in contrast to the obstacles faced by ships delivering other supplies to Yemeni ports.

“The coalition would ask us for the cars’ papers and clear them here,” said Saleh al-Ali, head of the port at As Shihr. “For the past three years there has been no need to apply for a permit from Riyadh.”

In March, however, the coalition changed the rules, requiring permits to be obtained from Saudi Arabia, according to Ali. He said he was told the new measures were introduced for security reasons.

A coalition spokesman did not reply to requests for comment on why the car-laden dhows have been exempted for so long.

Port officials said the dhows may have been simply an exception to the rule and in any case it had taken time to put the car trade on a more formal footing. 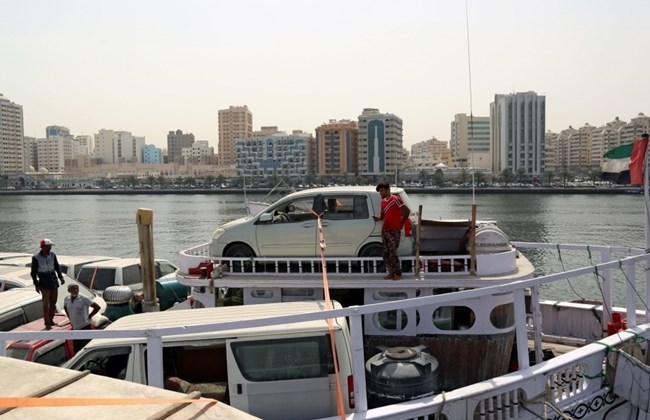 Car importers have been able to avoid the wartime restrictions imposed on Yemen. REUTERS/Satish Kumar

Mustafa al-Jaffrey, who used to send cars to Yemen overland through Oman before the war, said he had doubled his profits by using the sea route.

“It is much cheaper for me to buy and ship,” he said, adding that Japanese cars in particular were a good business for him.

“The Japanese drive their cars only for about 50,000 km before they sell them and buy new ones. That’s way less than the 150,000 km or more that people in the Gulf drive before they put a car up for sale, so the quality is better as well.”

In Japan, strict safety and pollution regulations force many drivers to sell their cars after a few years, so there are plenty of good quality vehicles available.

Such cars can sell for as little as $1,000 at online auctions in Japan. A Toyota can be bought by traders for around $1,900 in Dubai and sell in Yemen for more than twice that.

“I buy a Japanese used car from an auction in Japan, sometimes an online auction, and then ship it here,” said Hammad Ali, marketing manager at Jan Japan (Cars 4 U), the top re-exporter at Al-Aweer in Dubai.
Ali has long imported such cars for re-export to places like Somalia and Afghanistan as many other countries that drive on the right, including the UAE, do not allow cars from Japan, where people drive on the left, on safety concerns.

“It is a safety thing … so most of them were going to Afghanistan and Somalia. Then three years ago, Yemen opened up,” he said.

Prior to 2015 in Yemen, where people drive on the right, cars with their steering wheel on the “wrong” side were banned for safety reasons, but road safety has been another casualty of a war that has killed more than 10,000 people.

As fighting continues, the Houthis control the north of Yemen, while coalition forces have seized the southern port of Aden and made gains along the southwest coast along the Red Sea.

“Yemen is a big country and people need to move around. The cars are going into the south, where it is relatively safe, and from there onward to the rest of the country,” Mahdy al-Mahry, another dhow operator and car dealer, said.

“People can buy one of these cars and use them to earn money for their families. Others just buy them as a cheap and safe means of transport.”

Not everyone has profited from the trade. The Yemeni government, which has a presence in Aden while the president is in exile in Saudi Arabia, has missed out on customs dues, although it now plans to regulate the car trade.

“While it has largely been unregulated for the past three years, we are slowly coming to it and we will organize the trade as the government prepares to impose a fee,” said Salem Ali Busamir, head of the Arabian Sea Ports Corporation of Yemen. He did not say when this would happen or how much the fee would be.

Traders however seem confident the new measures will not disrupt their business unduly.

“This trade employs hundreds at the port now. They can’t ruin that, even if they impose a small tax,” said Ghaleb al-Mahry, who has a car showroom in As Shihr.