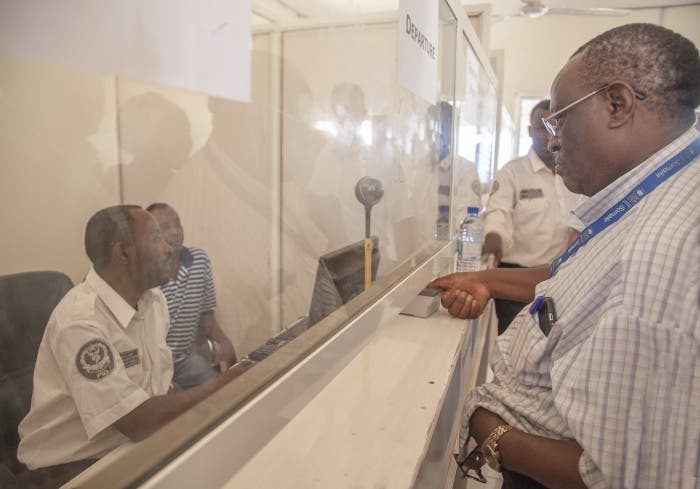 MOGADISHU (Caasimada Online)–With a new border management system now in place in Somalia, Stephen Matete is looking forward to his next posting. Since 2011, the 34-year-old Kenyan has been a National Officer with IOM’s Immigration and Border Management programme. Among the areas of focus for the programme are border management information systems, which ideally balance efficiency in traveler movements, and security.

For its borders, Somalia chose a solution developed by IOM, the UN Migration Agency, placing Matete and the rest of the IOM team at the forefront of the implementation. Commonly known as MIDAS, the Migration Data Analysis System is a high-quality, user-friendly and fully customizable option for states in need of a cost-effective and comprehensive border management information system.

“The priority is strengthening state functions in relation to border management. We work with governments,” said Matete who will soon be working from the Gambia at the IOM Office in Banjul.

MIDAS was developed by IOM in 2009 and has the capability to collect, process, store and analyse traveller information in real time across an entire border network. The system enables states to monitor those entering and exiting their borders while providing a statistical basis for migration policy-related planning.

“This system does passport reading, it takes the photo of a traveller who’s coming in, it also takes the finger prints…It’s integrated in nature,” said Matete. “This is what all this captures and then runs it over a database to check if you have the right of entry or not. If somebody is an impostor it can always flag all that at the port of entry.”

For governments, apart from cost considerations (given IOM’s status as a non-profit United Nations organization) another advantage is that IOM ensures their full and exclusive access of any data collected through the system. This is in addition to IOM providing expert guidance throughout the installation process, including training and post-project support.

Somalia’s association with MIDAS began in about 2007, and now is operational at 16 ports of entry, with over 150 work stations in both Somalia and Somaliland. Among those supporting MIDAS’ introduction in Somalia has been the European Union and Germany through the Better Migration Management (BMM) programme.

BMM is funded by the EU Trust Fund for Africa and the German Federal Ministry for Economic Cooperation and Development, and is coordinated through the German Corporation for International Cooperation GmbH (GIZ). It aims to improve migration management in order to reduce the trafficking and smuggling of migrants, within and from East and the Horn of Africa.

BMM also supported Somalia’s newly-renovated Garowe International Airport, located in the capital of Puntland state, to increase its capabilities in data management, the reception of passengers and in queue management. The airport re-opened in January, having been closed in 2013.