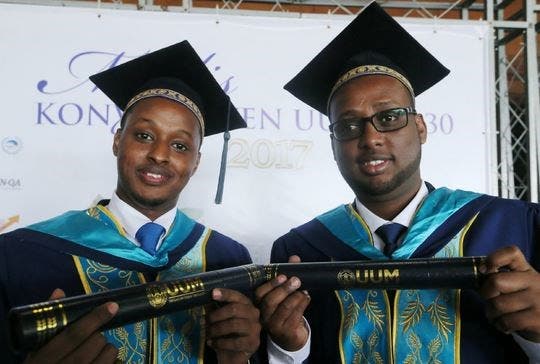 Somali youth are on the frontline of promoting recovery in the strife-torn Horn of African nation after pursuing higher education in foreign countries, including China.

Hundreds of Somali youth have undergone university education in China either through scholarships or through self-sponsorship in recent years.

These graduates are now forming the background of the country’s key sectors such as education, health, and engineering among others.

Adan Abdulkadir is a surgeon based in Bay Regional Hospital in southwestern Somalia. He studied in China and decided to bring his skills home at a time the country was undergoing an acute famine in 2012.

“I started my study in medicine in 2007 in China and after completing with a Bachelor’s degree, I returned to Somalia in 2012. The country was undergoing a severe famine,” Abdulkadir told Xinhua on Monday.

He took up assignment at Banadir hospital in the city. “There were so many children suffering from diarrhea and so my main work was to treat these children,” said Abdulkadir.

According to the United Nations, the famine in Somalia which started in 2011 claimed about 260,000 lives.

“I moved to Bay region in southwestern Somalia and started working in the biggest hospital there – Bay Regional Hospital,” said Abdulkadir, adding that he is now in charge of the surgery department.

Abdulkadir has been able to transfer his skills and knowledge to several of his colleagues both in Mogadishu and Bay region.

He is not alone in the cause. Amin Mohamud earned his Master’s degree in medicine from China in 2017.

“I started my undergraduate studies at Wuhan University and thereafter proceeded for masters at Central South University. I came back to the country and teamed up with friends we studied together in China to establish a hospital to serve our people,” Mohamud told Xinhua.

He said he received quality education in China which has enabled him offer professional services to his clients, adding that he appreciated the support he got during his studies.

“The people in China are very friendly and we got all the support we needed,” said Mohamud.

Mohamed Deeq shares similar experiences with his colleagues. He too studied at Wuhan University. He is an internal disease doctor (internist) in Mogadishu.

“I finished both my Bachelor’s and Master’s degree at Wuhan University in China,” said Mohamed.

“When you get the chance to study in China, you are lucky. They teach using high-end technology and that has helped me a lot as internal disease doctor at Digfer Hospital.”

He revealed that plans were afoot to set up a voluntary program with colleagues who studied in China that will focus on raising awareness and sensitization on disease spread and prevention.

Recovering from two decades of civil war which destroyed infrastructure and social institutions, Somalia is tapping on skills from its citizens who fled the country and got the chance to study abroad.

Chinese embassy in Mogadishu flagged off 42 Somali students drawn from all regions in September to study in China through a Chinese government funded scholarship scheme.

The number was double that of 2015 which saw 20 students benefit from the scholarship.

The return of these students to their homeland after completion of their studies in China is expected to bridge a yawning skills gap.