“Our plastic shelters were flooded with water,” said Kote Adi, who is settling into a new tent site on higher ground.

Hardship and uncertainty haunt him and thousands of others who’ve left Moyale, a market town straddling the border between Ethiopia and Kenya, and its surroundings in Ethiopia’s Oromia region for safety in Kenya. Some are staying with relatives and friends, or in makeshift camps scattered across the normally arid Marsabit County.

Roughly 3,350 of them, including Kote Adi, have found at least temporary security by registering with the United Nations as refugees at Dambala Fachana. Lacking most of their belongings and normal routines, vulnerable to food shortages and illness, they have no idea when they might be able to safely go home.

Political and ethnic rifts keep them away. Ethiopia’s government blamed the March 10 civilian deaths on faulty intelligence, saying soldiers had been deployed to subdue militants from the nationalist Oromo Liberation Front. The Oromia region has been a hotbed of unrest, with ethnic Oromos long complaining of underrepresentation in government and lack of economic opportunities. Nearly three years of their mass anti-government protests led Prime Minister Hailemariam Desalegn to step down in mid-February.

With Oromia native Abdiya Ahmed Ali’s April 2 installation as prime minister, some of the displaced ethnic Oromos made their way home to Moyale.

Some discovered their dwellings had been looted.

“When I went back, the door was broken. … None of my stuff was there,” Abdiya Gelma told VOA in a phone interview, ticking off missing items including her bed, kitchen utensils and a rug. Now she and her child are staying with relatives.

Moyale remains tense after more rounds of violence. A grenade exploded at a bus station April 17, killing at least three people. Gunfire broke out May 6 between Oromo and Garre ethnic groups, provoked by the Ethiopian Somali Region’s paramilitary force firing on a local police station, a resident told the Addis Standard. That regional force is part of the federal Command Post that has implemented a national state of emergency since then-prime minister Desalegn’s resignation Feb. 15.

The border town “is so volatile. Our neighbors who went back to Moyale are coming back again” to Dambala Fachana, refugee Kote Adi told VOA. 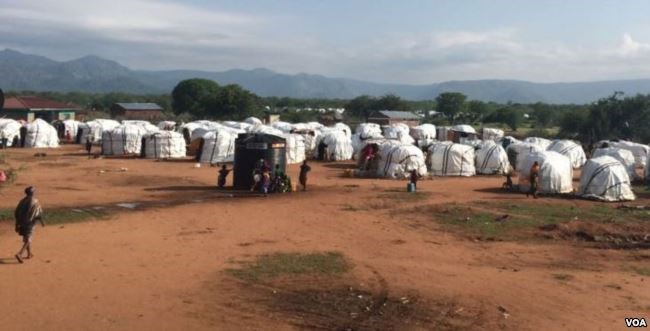 Plastic tents sprout on bare ground at Dambala Fachana, intended as a temporary refugee camp in northern Kenya. With recent heavy rains, some refugees have been moved to higher ground. (D. Gelmo/VOA)

He and Nagelle Kote are staying put in the camp for now, Kote Adi said.

Nagelle is his second wife; his other wife and their seven children, along with his mother, remain in Yabelo, an Ethiopian city about 210 kilometers northwest of Moyale.

“I wasn’t able to contact my family there because of road closures and [poor] phone connections,” Kote Adi said, adding that he and Nagelle escaped Moyale on foot.

Now he and Nagelle have an infant daughter, Tiya. She’s among at least 20 newborns in the camp, her father said. More than 600 pregnant women were among the 9,700 asylum seekers arriving in northern Kenya from Ethiopia’s Oromia region, the U.N. Refugee Agency reported in mid-March.

Kote Adi operated a cattle-trading business just outside Moyale; now he has become a day laborer. He earns 100 shillings a day, but spends up to 60 shillings on the round-trip travel to a construction site two hours away.

“It is the only way I can help my wife,” Kote Adi said, explaining that the extra money goes toward supplementing the rice, maize, sugar and milk rations provided by aid organizations such as the UN, its World Food Program and the Kenya Red Cross.

Conditions have become more challenging with recent heavy rains, which give rise to flooding, more mosquitoes and higher risks of malaria and water-borne ailments.

“The area we live in is [near] a forest infested with mosquitoes, where you hear lions roaring all night,” Kote Adi said. 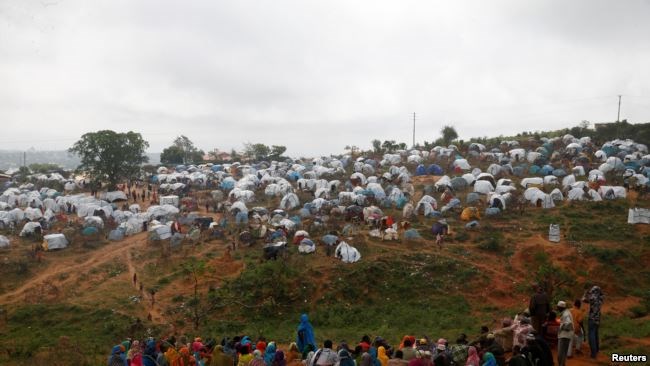 Ethiopian asylum seekers’ tents are seen at the Somare refugee camp on the Ethiopian-Kenyan border near the town of Moyale, Kenya, March 27, 2018.

He estimated his was among 31 households affected by flooding. Yvonne Ndege, a U.N. Refugee Agency spokeswoman, did not give VOA a number but said in an email that heavy rains affected “few refugee families” among the nearly 1,400 households registered with the camp. All were transferred to higher ground.

Emergency funds have been “diverted from other refugee operations in Kenya” home to Dadaab and its five camps, another UNHCR spokeswoman, Rose Ogola, said an email to VOA. She said U.N. agencies, along with NGOs, were assessing humanitarian needs, developing a budget and would seek donations. These would support an estimated 5,000 asylum seekers at Dambala Fachana and also the Somare camp near Moyale for six months.

Meanwhile, local volunteers such as Abdiya Golicha, a Marsabit County resident, are trying to assist the displaced in and around Dambala Fachana. She has repeatedly visited the camp with donations.

At first, “the kids didn’t even have shoes or clothing. We bought these for them,” Abdiya Golicha told VOA. She said local residents provided food and other basics until aid agencies could get set up. Volunteers also helped erect the plastic tents that shelter the displaced.

“We received them respectfully, because we are one people,” Abdiya Golicha said. “We speak the same language, although we’re divided by a [national] border.” 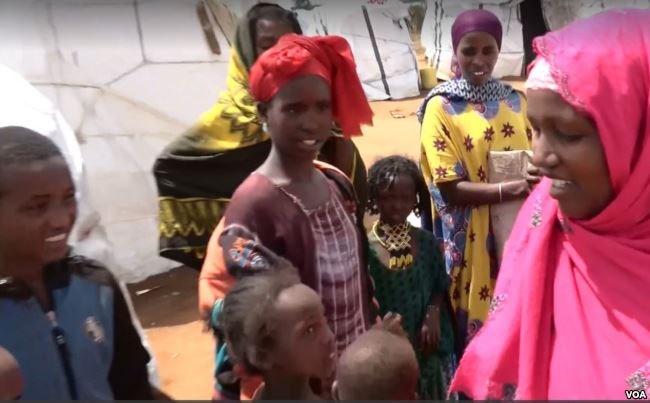