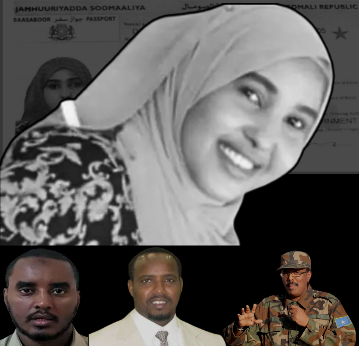 On Saturday evening, June 26, at 8:03PM, 24-year-old Ikran Tahlil, a cybersecurity expert for Somalia’s National Intelligence and Security Agency (NISA), disappeared just outside of her home in Mogadishu (close to the agency’s headquarters) and has not been seen or heard from since.

By all accounts a bubbly, energetic and scholarly young woman, Tahlil was a rising star, and the case of her disappearance has gripped the nation, not just because of who she was and the future she had, but because of where she worked and the information and officials, she has access to.

On September 2, sixty-eight days after one of their own agents seemingly disappeared into thin air, the National Intelligence and Security Agency posted a brief and befuddling statement on its website indicating that, after an internal investigation, NISA agents had determined that the young woman’s kidnappers had taken her and handed her over to the al Qaeda-linked Al-Shabaab terrorist operation, who promptly killed her.

In the same statement, NISA extended its “condolences to the family, relatives, and all members of the Agency, on the heinous act of Al-Shabaab militants who killed the girl.”

Here’s the thing.  “Condolences” are not adequate when it comes to the death of a young woman, particularly when that young woman works for the National Intelligence and Security Agency of Somalia.  “Thoughts are prayers” aren’t good enough when a family’s life has been shattered and getting answers from your own government has proven at best, deficient and, at worst, impossible.

The fact is that the explanation provided by the Security Agency appears a little too convenient given the circumstances surrounding Tahlil’s disappearance.  And although the statement released on September 2 was clearly meant to close the book on the mysterious abduction of the talented and dedicated young civil servant, the end result was exactly the opposite.

And as more and more details began to emerge following the release of the inadequate statement, the questions and the suspicions began to surface almost immediately.

How could NISA be so sure of Tahlil’s death when there was no body to be found and no location to be searched?  Why had Tahlil’s mother, Qali Mohamoud Guhad, claimed that her daughter was on her way to meet a senior NISA commander on the day she disappeared?  And why had Al-Shabaab, typically not shy about its intention in targeting spy officers, been so quick to deny involvement in this disappearance?

With the eyes of a nation closely watching and the tensions of a country rising like a flash flood, this week Prime Minister Mohammed Hussein Roble gave a forty-eight-hour ultimatum to NISA Director Fahad Yasin, demanding an account detailing NISA’s full knowledge of the disappearance.  Yasin, in turn, responded by demanding that President Mohamed Farmaajo reconvene the national security council meeting to address the situation, a guileful political ploy designed to weaken the Prime Minister’s influence on this situation.

The Prime Minister countered by sacking the controversial Intelligence Director, who has recently come under intense suspicion by, among others, the family of Ikran Tahlil.  And, in an unbroken circle of confusion, coverup and conspiracy, President Farmaajo denounced the sacking of Yasin, reaffirming his support of the Director and declaring that the firing was unconstitutional.

And while the wheels of ineptitude continue to spin in the shady backrooms of the Somalia government, one thing is still certain.  The disappearance of Ikran Tahlil is no closer to be solved today than it was on June 26, the day she went missing.

For the sake of Ikran Tahlil and her family, the powers in the Somali government need to set aside their political preferences and affiliations, put aside the distrust and animosity they have for each other and get to the bottom of this disappearance.  Continuing to operate the government like a convention of keystone cops is only going to plunge our country further into a nation pungent with instability, chaos and destruction.

The connection between the resolution of the case of Ikran Tahlil and the future stability of the Somali government is uncomfortably linked.  The next steps taken to help find Ikran Tahlil could very well determine the future structure of Somalia’s government and the path towards stability for our country and our region.  It goes without saying that the people of Somalia will stand for nothing less than the elimination of all corruption and cronyism within the hallways of our government buildings.  Clean up the politics and you will clean up the country.

But lest we lose sight of what really matters as the shell game of politics is distracting our attention, let’s all remember one important thing.  Her name is Ikran Tahlil.